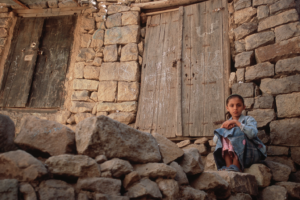 The lack of formal economic institutions in Yemen solidifies the nation’s position as one of the poorest countries in the Middle East and in the world. Its violent civil war largely prevents the development of economic structures and impedes infrastructure improvement. Furthermore, conflict with Houthi rebels, the insurgency group opposing the Yemeni military, destabilized Yemen’s crucial hydrocarbon exports. This has significantly damaged government revenue and forced a broad suspension of fundamental public services. Consequently, the economic structures that are present in Yemen remain informal and underdeveloped.

Politics, War and the Economy

Since March of 2015, 100,000 Yemenis have died, and indiscriminate Saudi aerial bombing caused most of the civilian deaths. Interference from the U.S. and the U.K. by supplying weapons to Saudi Arabia exacerbates the poor economic circumstances. Mass causalities and civil unrest have run rampant.

During the civil war, the Houthis seized the opportunity for profit maximization through illegal methods to solidify their regional occupation. Opportunities arose in the most informal economic institution: the black market. Arms manufacturing, food smuggling, consumer goods and drugs, human trafficking and military leaders pocketing troops’ salaries and food allowances all contribute to Yemen’s economic instability.

Future economic prospects depend on the political situation in Yemen. While the past few years have shown some optimistic growth, a recent surge of violence by the Houthis in the temporary capital of Aden puts further stress on the fragile macroeconomic circumstances. Predictions for the next two years determine that the economy will grow between 2% to 2.5% annually, yet these rates are far below what is necessary for the reconstruction and human development.

The domestic turmoil that the Houthi insurrection propagated prevents Yemen from gaining control over its own resource sector. Prior to the civil conflict’s escalation in 2014, 25% of Yemen’s GDP and 65% of government revenue came from oil and gas. On the other hand, Yemenis rely heavily on foreign trade; approximately 90% of the population’s food is imported. However, the Central Bank of Yemen (CBY), one of the many fragmented state institutions, had to disrupt foreign exchange for necessary imports and public sector salaries. This has led to high inflation and has worsened the humanitarian crisis, both of which facilitate the deterioration of robust economic institutions in Yemen.

Economic instability causes the nation to rely on financial assistance from neighboring Saudi Arabia. Furthermore, its resource bank of oil and gas production nearly stopped at the outbreak of civil war in 2015. In late 2018, Yemen’s economy gave an indication of stabilization as the GDP growth neared positive, a stark contrast from the economic loss of 40% that occurred between 2014 and 2017. While the oil and gas industry has seen production increases, the destruction since the conflict began continues to leave many Yemenis without a stable income. The U.N. estimates that 55% of the entire Yemeni workforce has lost employment since the beginning of the civil war.

Aid and Hope for Yemen

Yemen depends on the United States, specifically USAID, to work with local and international partners to reconstruct social and economic institutions. However, providing humanitarian assistance is simply not enough to propel Yemen’s development. To address the nation’s structural macroeconomic issues, USAID created the Yemen Economic Stabilization and Support (YESS) program in July 2019. The technical assistance that it provides to the CBY-Aden is to better manage the financial sector and assist cash-flow conditions by fortifying the bank’s critical functions, such as managing currency and foreign exchange operations.

One can find a glimmer of hope for Yemen in YESS’s success in streamlining customs and commercial trade. Between October 2018 and March 2019, shipment inspections fell from 100% to 70%, and customs processing reduced from five to two days. The Trusted Trader Program at the Yemen Customs Authority further enriched this progress. The inspection rate may be a critical indicator for development, as it implicates fewer barriers to citizens receiving humanitarian aid.

Today, economic instability remains a defining factor in Yemen’s overall underdevelopment. Widespread damage to infrastructure due to the war stresses the currency exchange rate, accelerates inflation and limits food and fuel imports. Most of the labor force works in agriculture and herding – a key indicator of an underdeveloped economy – while construction, commerce and other industries make up less than 25% of total employment. To avoid remaining economically underdeveloped and escape poverty, it is essential that Yemen strengthen its central bank, reclaim resource control and address its liquidity crisis.