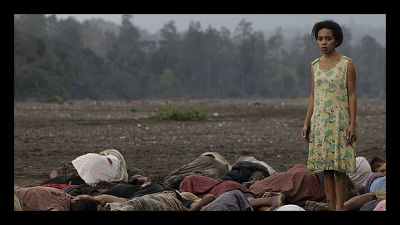 East Timor has produced its first feature film, which exposes the dire events of the country’s 24-year Indonesian occupation and the role of women in the nation’s struggle for independence. The film, “A Guerra da Beatriz” or “Beatriz’s War” is the story of a young woman’s fight to reveal the truth about her husband in the midst of his disappearance during a brutal massacre by Indonesian troops and his subsequent return. With the violence of the invasion as a backdrop, the film depicts a woman’s inner battle to remain true to her two loves: her country and her husband.

The film has a similar plot design as the 1982 French film, “The Return of Martin Guerre,” which portrays a historical case of a 16th-century soldier who returns from war and is no longer recognized by his community.

The main character, Beatriz, is a girl growing up in the mountains of East Timor in 1975 when the Indonesian invasion commences. Beatriz is married at the age of 11 to a young boy and, as the destruction of the occupation ensues, Beatriz becomes a resistance fighter to defend her nation. After her husband vanishes amid the 1983 Kraras Massacre, she continues her crusade against Indonesian forces. The reunion with her presumably dead spouse 16 years later ignites sentiments of longing that are further complicated by suspicions surrounding his identity.

The majority of those involved in the film have strong personal connections to East Timor’s brutal history. The actors and crew, including thousands of extras, have all had relatives lost during the war and have witnessed the torture and murder of family and community members.

The film was co-directed by East-Timorese filmmaker Bety Reis, who also plays the part of Beatriz’s mother. Reis co-founded East Timor’s first film and television production house, Dili Film Works, in 2010 and is its acting director. At the age of 16, Reis witnessed first hand the killing and rape of her fellow countrymen by the Indonesian military. Reis claims that she came very close to execution and is thankful that she was spared, allowing her to create a film which could inform the world about her country’s bloody past.

The rise of East Timorese cinema marks an important step in the country’s cultural development. The growth of the nation’s culture was severely stunted by the impacts of the recent war with Indonesia. As more of the country’s citizens emerge with creative narratives that illustrate East Timor’s rich history, the world will benefit from gaining insight to the strengths and triumphs of a newly minted nation.