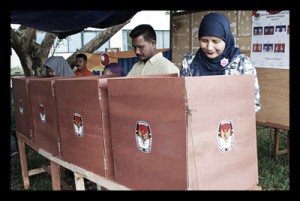 Indonesia’s upcoming presidential election, currently slated for July 9, gained a great deal of attention when the National Commission on Human Rights refused to examine the human rights records of any of the presidential candidates.

Since the announcement, Human Rights Watch (HRW) has given questionnaires to all of the candidates in order to demonstrate that the candidates want to improve Indonesia’s human rights record. As of now, HRW has distributed the questionnaire to Jakarta Governor Joko “Jokowi” Widodo for the Indonesian Democratic Party of Struggle, Aburizal Bakrie for the Golkar Party, Prabowo Subianto for the Gerindra Party, Wiranto for the Hanura Party, Rhoma Irama for the National Awakening Party, as well as to the parties who have not yet decided on their presidential nomination.

The questionnaire asks how committed the candidates will be in improving areas where a large amount of religious violence is occurring. These areas include Aceh, Banten, East Java, West Java and West Sumatra.

Additionally, the HRW is asking candidates if they plan to comply with the United Nations Human Rights Council’s (UNHRC) recommendation to allow foreign journalists to enter into Papua and if they will release political prisoners.

The HRW should receive responses by May 16 and will publish their findings in early June, prior to the presidential election.

However, the record of Prabowo Subianto, the candidate for the Great Indonesia Movement Party (Gerinda Party) has recently come under scrutiny. Human rights groups are questioning Prabow’s actions from when he started as an officer in the military to his actions as a three-star general.

Human groups are calling for an investigation regarding Prabowo’s actions in East Timor in the 1980s following allegations that he ordered a massacre of over 300 civilians. Additionally, these groups are claiming that Prabowo was “responsible for the abduction and torture of 23 pro-democracy activists in 1997 and 1998, and for orchestrating riots in May 1998” which ultimately resulted in “more than 1,000 deaths and the rapes of at least 168 women.”

In 2006, the National Commission on Human Rights issued a report with the names of 11 people, including Prabowo, who they thought should be prosecuted in the abductions of those 23 activists.

Prabowo’s military career ended because of the abductions case, where he accepted responsibility for the torture of 9 of the activists, but said that he was not responsible for ordering the abductions or torture and said nothing about the other 14 activists.

The winner of the election will serve as the second Indonesian president to be directly elected by the public. Whether or not the human rights records of the candidates have a strong impact on who is elected will be determined in July.