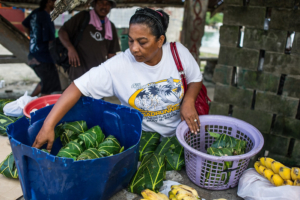 Food and celebratory meals are the cornerstones of culture in the Federated States of Micronesia (FSM). The gradual change from traditional foods like fish and taro root to imported convenience foods has caused a rise in non-communicable diseases, including diabetes and high blood pressure. FSM health officials attribute the rise of diabetes-related deaths to an influx of processed food. As of 2020, 463 million people worldwide suffer from diabetes, with 90% of cases being Type 2. The FSM has the world’s highest percentage of diabetics by population in the world; a staggering 37.2% of people have diabetes in Micronesia as of 2013.

Type 2 diabetes can result in a host of life-threatening complications such as heart disease, high blood pressure and amputations. Furthermore, dialysis machines, used to support patients in advanced stages of the disease, are largely inaccessible in the FSM.

Too Much of a Good Thing?

The people of the FSM traditionally fished and farmed local crops before World War II. The remote location and minimal infrastructure called for physical work to produce food, balancing the intake of nutrients with exercise. After the war, the U.S. began to import food to improve relations with its strategically located allies in the FSM. Presently, up to 40% of imports are food items. For instance, Micronesia imports 12% of canned meat products.

Micronesians, like all people, particularly those in poverty, consider prices when buying food. The median household income was $7,336 as of 2019. At this time, most Micronesians earned a living in the agriculture, fishing and tourism industries. Today, a combo meal at a fast-food chain can range from $8 to $10 whereas a head of iceberg lettuce alone routinely tops $4 per head. Additionally, because the group of islands is remote, the cost of importing goods continues to rise.

In recent years, there has been a push to return to locally grown food. Increasing the production of domestic food will lower prices and increase the demand for healthier food. Ideally, higher demand for healthy food will decrease diabetes in Micronesia. Micronesians aim to invest in their agricultural systems and improve their crop-growing strategies. For example, hydroponics will increase the availability of affordable produce.

The effects of climate change in the FSM are becoming increasingly apparent. For example, seawater is damaging productive agricultural land at an alarming rate. Native crops like breadfruit and taro suffer from rising sea levels as saltwater leeches into their root systems, limiting crop yields or rendering them inedible.

As climate change displaces people and increases the unemployment rate, it becomes even more challenging for Micronesians to afford basic necessities like healthy food. Unfortunately, the decrease in the supply of domestic produce also inherently increases dependence on imported food.

Education is Prevention of Diabetes in Micronesia

Battling diabetes in Micronesia requires a multidisciplinary approach: doctors, nurses, teachers and health care workers must strive to educate their communities about the disease. Health care workers have focused their response on educating patients about the causes, symptoms and treatment of diabetes. Local health departments such as those in Kosrae provide ‘One-Stop Shops’ for vital bloodwork, wound care, vaccinations and dietary advice. The staff also works throughout the surrounding communities to educate people about obesity, tobacco and alcohol use, provide vision and blood pressure screenings and refer diabetics and pre-diabetics to specialty clinics for follow-up.

Educating patients about wound care and infection prevention has already lowered the incidence of amputations in some areas of the FSM. On average, a quarter of people with diabetes have some form of foot or lower leg ulceration during the course of their disease. Education and prevention are pivotal in improving the outcomes of patients who receive one lower-limb amputation. Currently, 21% of these patients need a second surgery. Thankfully many clinics and hospitals have focused on nutritional education, helping patients to improve their food choices and, in some cases, reverse the diagnosis.