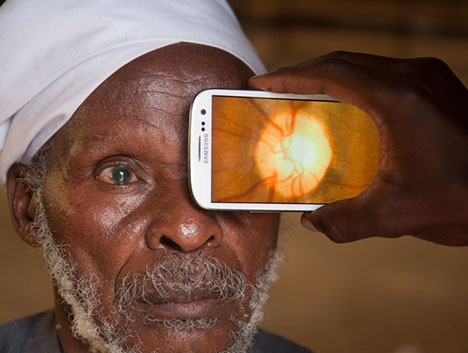 The product of collaboration between The London School of Hygiene and Tropical Medicine and a group of Kenyan doctors, The Portable Eye Examination Kit (or PEEK), is a smartphone app that promises to help deal with blindness in Kenya, Business Daily Africa reports.

According to PEEK’s official website, any smartphone equipped with the app can provide accurate eye tests by taking high quality photos of the retina. Such photos will enable an ophthalmologist to “view cataracts clearly enough for treatment classification, detect signs of glaucoma, macular degeneration, diabetic retinopathy and signs of nerve disease.” The app displays its versatility in that it will also help doctors with identifying other health problems including “severe high blood pressure and diabetes.”

According to their website, PEEK’s developers believe that this advanced technology simplifies the process of retinal analysis, saving users considerable time and effort, compared to the traditional method of using an ophthalmoscope.

In a March 3 article, Ventures Africa reported that PEEK has recently been launched in the Trans-Nzoia county in Kenya. As it is explained later in the article, this particular county was chosen due to its high rate of vision problems. In an interview with Ventures Africa, one of the co-founders of the app Dr. Hillary Rono said that “out of the 2.5 million people in the region, 80 percent have eye problems that, if not checked, would lead to avoidable blindness.” More surprisingly, “five in every 1,000 people in the region are blind,” Dr. Rono continued.

PEEK has been brought to use in up to 350 schools in Trans-Nzoia, as reported by Business Daily Africa. Ventures Africa reports that “21,000 school children in the district and 900 were found visually impaired and were referred to the Kitale County Hospital Eye Unit for treatment.”

PEEK has already made considerable strides in combatting blindness in Kenya, and its developers hope to expand the project in the future. According to Business Daily Africa, the app is in line with Operation Eyesight and Christian Blind Mission, sponsored by the Standard Chartered Bank. The project has “helped to restore sight to more than 8,000 children,” said the bank’s chief executive Lamin Manjang. “The project has a target to reach 120 million people globally.”

Although considerable progress has been made in the fight against blindness in Kenya, much work remains to be done. “With around 1 in 10 men and 1 in 20 women color-blind, it’s important to be aware of what you can and can’t see,” says PEEK’s website. Developers are still exploring ways to add new capabilities to the app, including a wider range of color blindness and contrast tests.