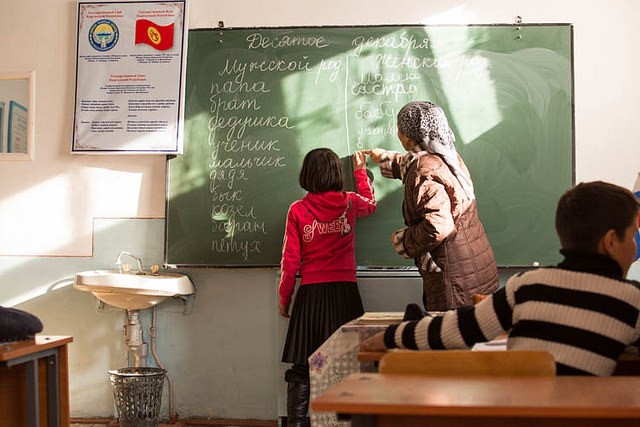 Many formerly Soviet-controlled nations struggle to this day to bolster strong national institutions and free compulsory education. Kyrgyzstan has proved one of the most difficult to satisfactorily supply.

Before the dissolution of the Soviet Union in 1991, Kyrgyzstan’s economy and industry were regulated by Moscow. Since Soviet disbandment, the nation has painstakingly transitioned toward a free market economy, which has had severe effects on the economy. Economic and governmental instability of Kyrgyzstan over the past 25 years leave 41 percent of the population below the poverty line, with many living on less than two dollars per day.

Kyrgyzstan’s challenging post-Soviet renovation undermined the nation’s education system. With more and more families slipping into poverty, many required every household member to work and contribute to sustaining the family, and schooling became a kind of luxury. Simultaneously, the staggering government could ill afford to provide effective educational benefits. With limited resources, the government reduced compulsory education to nine years and passed on the responsibility of funding schools to local governments and parents.

Poor access to education in Kyrgyzstan impedes the restoration of the educational system. Costs of schooling continue to rise while educational quality remains quite low. School infrastructures are deteriorating, discouraging students from attending and the cost of mandatory uniforms for primary school students deters poorer families from participating at all.

Teachers in Kyrgyzstan are underpaid and poorly trained, and with a student to teacher ratio of one to twenty-four, they are likewise over-burdened. The result is a student body that remarkably underperforms in science, mathematics and reading.

As concerns educational equity, there are hardly discernable discrepancies between boys and girls in school. However, the incongruities between urban and rural students are highly problematic. The difference is most drastic in pre-primary and secondary school students; about three times as many urban students attend pre-primary and secondary school than their rural counterparts.

After Kyrgyzstan gained independence in the 90’s, almost 75 percent of pre-primary schools closed for lack of funding, and to this day less than 25 percent of students benefit from early learning institutions. This lack of early education has exacerbated the low performance in attendance of primary schools in Kyrgyzstan, for early childhood stimulation enhances the intellectual and social development necessary to succeed in school.

Since 2015, UNICEF and the Ministry of Education and Science of the Kyrgyz Republic have worked to address the severe dearth of pre-primary and early learning schools throughout the country. Throughout the nation’s rural and underprivileged communities, 17 new kindergartens servicing more than 1,000 children have opened. These new facilities will be essential to expanding school readiness to rural Kyrgyzstan.

The World Bank has also implemented a project to improve the current education in Kyrgyzstan called Sector Support for Education Reform. The $16.5 million program will improve the management and accountability of schools, enhance teacher training and make Kyrgyz students better learners. By its conclusion in 2018, the plan should “reduce poverty, promote economic growth, and encourage a better quality of life.”