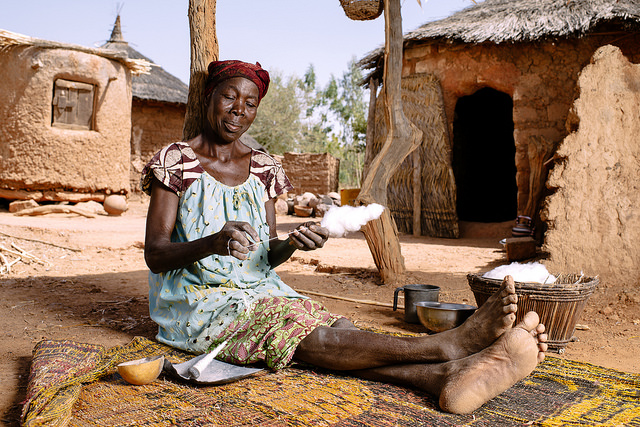 But the scarcity of credit access in Burkina Faso is more reflective of the country’s socioeconomic structural barriers rather than a systemic lack of capital. The banking system is regulated by the Centrale des États de l’Afrique de l’Ouest (BCEAO) and is comprised of 12 commercial banks and five specialized credit institutions, and as of June 2011, the majority of these banks met the new capital regional requirement of CFAF five billion.

But credit access is generally concentrated to a few large clients, with collateral requirements and high interest rates of 10-12 percent, preventing the majority of small and medium sized borrowers from participation. Pervasive gender inequality especially exacerbates these high barriers of access for women. Women are typically confined to lower paid informal sector jobs (such as subsistence agriculture) and there is no legislation prohibiting discrimination in access to credit based on gender or marital status.

However, the recent implementation of microcredit initiatives has helped lower these barriers to credit access in Burkina Faso, especially for women in rural areas. One of these programs is part of the Victory Against Malnutrition Project (VIM) that works with 200 villages in the Sanmatenga province and is funded by USAID’s Office of Food for Peace, implemented by ACDI/VOCA, Save the Children and three local NGOs. For example, in 2015 through a partnership with the microfinance institution Caisse Populaire, VIM brought financial agents to the village of Ouintokouliga and offered education and access to financing options.

For village resident Nobila Koroga, access to this additional capital allowed her to buy more animals on her farm which, in turn, generated enough extra produce and additional income to create food security for her household, pay her children’s school fees and cover unexpected issues such as family medical visits. This is especially significant considering that Burkina Faso’s human development index ranking is one of the lowest globally and the country is especially challenged by low levels of education and healthcare.

As Koroga’s experience demonstrates, credit access is a crucial asset in socioeconomic development and empowerment. The government of Burkina Faso has recognized this and is making financial inclusion a priority, as outlined in a recent IMF report.

One of the goals of the government’s four-year National Plan For Economic And Social Development, which went into effect in 2016, is to bring broader banking service utilization rates to 35 percent by 2020. This will begin to be implemented in 2018 through the national inclusion financial strategy, which, alongside further expanding microcredit initiatives, also emphasizes mobile banking and the reduction of administrative barriers.

Additionally, on March 14, the IMF approved a three-year arrangement with Burkina Faso under its extended credit authority, totaling $157.6 million in support of these initiatives. While credit access in Burkina Faso, and banking more broadly, still has a long way to go in terms of inclusion, the success of these international collaborative microfinance initiatives and the country’s broader long-term strategy demonstrate it is embarking on a path toward success.

Foreign Aid to Africa: The United States vs. ChinaHow One Nonprofit is Helping to Reduce Child Mortality Rates in Mali
Scroll to top