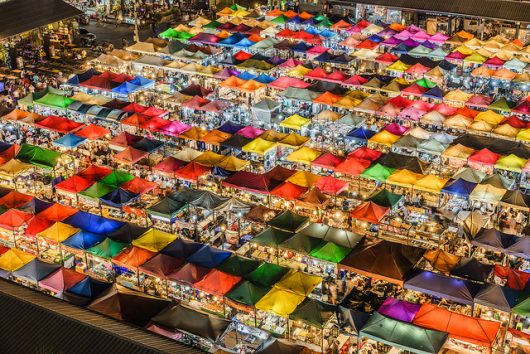 A bus fee ranges from approximately THB 8 to 30, depending on the type of the bus. Since one Thai Baht is worth about $0.03, public transportation can cost less than a dollar. Tuk-tuks, the three-wheeled taxis that are common in the country, normally cost THB 40 to 100 for a short ten-minute ride, which is also highly affordable. The base fare for metered taxis is THB 35.

Cheap rental and housing prices also contribute to the low cost of living in Thailand. Numbeo states that an expensive one-bedroom apartment inside the City Center in Bangkok costs around THB 14,317 (equivalent to approximately $430), which is much cheaper than the rent in major U.S. cities.

The street foods are also known for their affordability. A simple meal consisting of rice, vegetables and meat on a single plate ranges from approximately THB 30 to 50, which equals to just more than one dollar. A fancier meal with a selection of dishes that may often include an entire fish would cost from THB 60 to 200 ($2 to $6).