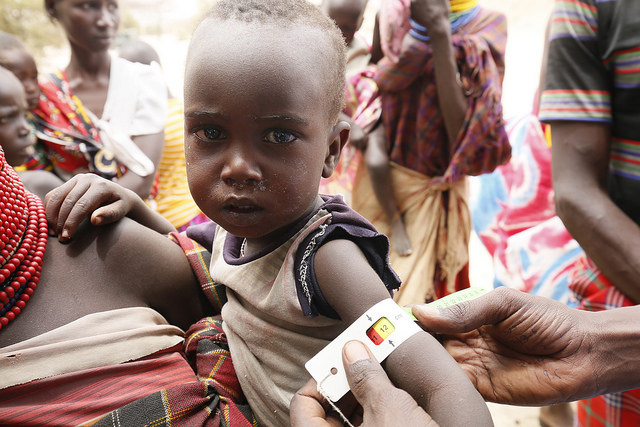 According to the Food Aid Foundation, 1/9 people on earth do not have access to enough food to ensure proper nourishment. Malnutrition is defined by the Oxford Living Dictionary as the “lack of proper nutrition, caused by not having enough to eat, not eating enough of the right things, or being unable to use the food that one does eat.”

This definition, although correct, hardly captures the severity of its meaning. A clear scientific explanation of malnutrition better illuminates the severity of the pervasive issue that exists primarily amongst those who live in poverty. Micronutrients — which are vitamins and minerals — are non-energy yielding compounds which the body requires to run efficiently. For example, the water-soluble vitamins (all of the B vitamins) are coenzymes which facilitate all of the bodies’ metabolic functions.

Considering how easy it is to be deficient in certain micronutrients due to simple nutritional ignorance, the level of micronutrient deficiencies –which in turn cause very negative health consequences — in developing countries where poverty is high and nutritional adequacy is low is much higher than in western countries where the contrary is the case. At the very least, 795 million people in the world experience severe negative symptoms due to lack of food.

For example, 84 percent of children in Kenya and 64 percent in India have a Vitamin A deficiency, whereas in a western country like Poland deficiencies in children are at less than 10 percent. These figures illustrate how countries that have a lower GDP per capita — and thus higher rates of poverty — often experience a higher rate/severity of cases of micronutrient deficiencies.

To cover all the micronutrients would be tedious; however, reviewing the statistics regarding the consequences of being deficient — specifically due to lack of food — proves extremely beneficial. The problem is extremely pervasive as one fourth of children’s growth is stunted globally due to malnutrition, poor nutrition causes 45 percent of child deaths ages 5 & below and malnutrition causes the death of 2.6 million children annually.

The above information may be unsettling, but understanding such disturbing information is the first step to changing such occurrences for the better. With concerted effort, the consequences of micronutrient deficiencies need not be as severe as they currently are.

Progress on micronutrient deficiencies has certainly been made — prevalence and number of children suffering from stunted growth due to malnutrition has been on a slow but steady decline. There are specific examples of this, such as in Uganda, where the rate of stunting due to malnutrition has decreased from 33 percent in 2011 to 29 percent in 2016. In fact, the government of Uganda and its allies (the U.N.) have a  goal to totally eradicate malnutrition by 2030.

U.N. efforts in scaling up nutrition interventions has been very effective in reducing the rate of malnutrition. However, according to the World Bank, efforts to reach the 2030 goal would need an additional $70 billion of funding by 2025. Funding itself is the evident driver of progress. For example, investing in Peru’s malnutrition problem reduced stunting rates by 20 percent over a 20 year period.

Many may ask, what can be done to help prevent this crisis from getting more out of hand? First and foremost, more people from all walks of life need to invest in nutrition. It is calculated that each dollar spent on nutrition delivers between $8 and $138 of benefits, according to the Copenhagen Consensus Center.

For more broad ways to help fight against world hunger and its negative consequences, donating to charitable foundations such as the World Food Programme, UNICEF, Feeding America, Feed the Hunger Foundation and others is something anyone can do to support the cause. Something “small” can make a huge difference, so it’s up to every willing individual to help solve this crisis.

Illustrating How the U.S. Benefits From Foreign Aid to SenegalUS Aid Impacts Prosperity in the Northern Triangle
Scroll to top