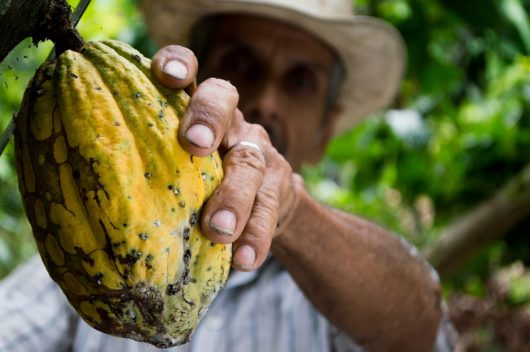 From 2018 to 2025, Mars Food Corporation has pledged $1 billion to establish ethical, sustainable supply chains. Mars, the parent company of M&M, Milky Way, Snickers, Uncle Ben’s and Combos, generates nearly $35 billion every year. With the money pledged, Mars hopes to improve its cocoa supply chain quality in various ways. Some of the issues being addressed are eliminating child labor, curbing worker exploitation, and promoting economic stability networks among their suppliers. One of the central aims of the sustainability pledge is to prioritize the wellbeing and interests of small farmers.

Issues in the Cocoa Supply Chain

Cocoa beans are the basis for some of Mars’ most popular treats. Farmers harvest and process more than 3 million tons of cocoa beans every year to keep up with the demand for chocolate products. Though chocolate sales in the United States generated $22 billion in 2017, the highest since 2012, cocoa prices did not increase accordingly. In fact, in the same year, cocoa commodity prices hit their lowest price in five years. This dramatic drop in price, more than 30 percent less than 2015, puts a stress on the supply chain greatly.

Individual farmers with modest landholdings produce the majority of cocoa worldwide. Most of these cocoa farmers have no other source of income and subsist on approximately $2 a day. While there are certifications for cocoa products such as Fair Trade and Rainforest Alliance, which consumers can use to minimize the environmental impact of cocoa production, these certifications do not address the condition of farmers. The farmers’ lack of power in this supply chain leaves them vulnerable to poverty whenever cocoa prices fluctuate.

According to John Ament, Mars’ global vice president of cocoa, the cocoa supply chain is broken. Mars Food Corporation’s sustainability pledge hopes to improve the cocoa supply chain and draw attention to the social and environmental issues tied to the cocoa industry. To protect the interests of small farmers, Mars plans to restructure its premium model which guarantees higher prices for responsibly sourced cocoa.

The above change will increase paid premiums and ensure that farmers receive a higher percentage of that premium. However, the company also hopes to provide 75,000 farmers and their families with support to augment crop productivity and diversify their income. Since cocoa has only two peak seasons annually, encouraging the development of other skills will empower farmers and help them achieve financial stability.

In addition to these measures, Mars’ sustainability pledge strives to curb deforestation, through enhanced certification standards. As of now, half of Mars’ cocoa carries a Fairtrade or Rainforest Alliance certification. Though Mars had previously stated an intention to purchase exclusively certified cocoa by 2020, the company wants to take this even further by introducing special criteria for Mars products. These criteria will go beyond the requirements of standard certifications and strive for full traceability, verified by a third party, to ensure its cocoa does not come from protected forests.

The CEO of Mars Food Corporation, Grant F. Reid, hopes that their sustainability pledge will encourage other companies to invest in similar goals. He said, “the engine of global business—its supply chain—is broken, and requires transformation, cross-industry collaboration to fix it.” As a food company, with an inherent interest in agriculture, Mars is approaching the pledge from a business and societal standpoint. This pledge will hopefully create a trend among large corporations of fusing business and social interests.