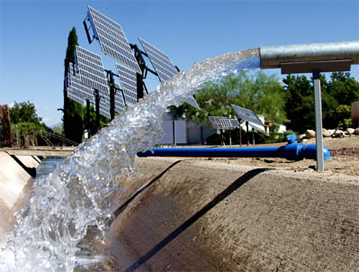 Each year, over a million diesel pumps consume approximately $900 million worth of diesel in Bangladesh, according to the World Bank. Like other gas-operated engines, the diesel pumps kick out the exhaust. Diesel emissions have been found to contain more than 40 hazardous pollutants, including nitrogen oxide along with heavy metals, such as arsenic, according to the Office of Environmental Health Hazards Assessment (OEHHA).

These emissions have both immediate and long-term health risks for the farmers operating the pumps. On contact, exhaust can cause irritation to the eyes, nose and throat. But more serious damage can occur over time. The Union of Concerned Scientists (UCS) reports that 80-95 percent of diesel soot contains “ultrafine particulates, which are small enough to penetrate the cells of the lungs.” These particulates and toxic gasses increase the risk of cellular mutation leading to cancer, respiratory and cardiovascular disease in those with long-term exposure to the emissions, according to the OEHHA.

To combat the problems associated with the lack of electical grid access and prevalent use of diesel powered engines, the World Bank has created the Rural Electrification and Renewable Energy Development II (RERED II) Project. With a yearly average of more than 200 sunny days, studies have shown that Bangladesh is a prime candidate to use solar power as an alternative to the expensive and health threatening diesel, according to the Climate and Development Knowledge Network.

The program is straightforward. RERED II is designed to give farmers access to clean energy irrigation while saving them money at the same time. The solar pumps, funded in combination by the World Bank, the Bangladesh Climate Change Resilience Funds (BCCRF) and the United States Agency for International Development (USAID), produce water that serves multiple farms. With this arrangement, the farmers only pay for what they need during the irrigation season, according to World Bank.

At this point, the program is still a pilot and serves a limited number of communities. However, since the Infrastructure Development Company (IDCOL) has implemented the pilot, farmers in the selected areas have chosen the solar pumps over their diesel counterparts.

With the installation of solar pumps showing positive results across the board thus far, the Bangladesh government intends to install more solar panels throughout the nation. As reported by The World Factbook, in 2013 Bangladesh produced 97 percent of the country’s electricity through the combustion of fossil fuels. By making steps toward switching to clean solar energy, the Bangladesh government will be able to drastically lower carbon dioxide and other emissions in future years, improving air quality and the health of Bangladeshis throughout the nation.