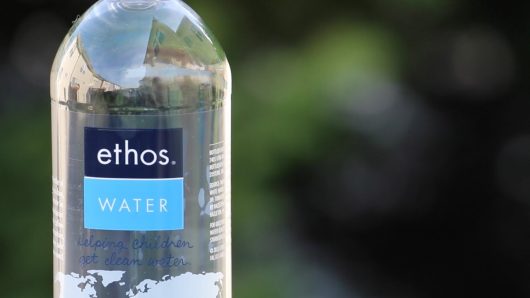 With more than 1 billion people around the world lacking access to safe drinking water,  Ethos Water founder Peter Thum is using proceeds from his bottled water sales to provide clean water to areas in need.

Ethos Water began in 2001 with the goal of helping children get clean water. Thum, the man behind the mission, founded the company after a business trip to South Africa where he saw the lack of clean water in many communities. Thum became consumed by the idea of creating a bottled water company that gave back to those in need of clean water; he then quit his job to pursue his plan.

Thum’s old classmate, Jonathan Greenblatt joined Thum in late 2002 to help create Ethos. Together they launched their bottled water company in August of 2003 and formed an organization called Ethos Water Fund to invest funds from their business into safe water programs.

In 2005 Ethos partnered with Starbucks in hopes to sell more water. Currently, a little over $12.3 million has been raised to give clean water to individuals who otherwise would not have it, according to Starbucks. That money will help over 500,000 people around the world.

In 2008 Ethos Water Fund and Starbucks Foundation decided to give two NGOs, CARE and Project Concern International, each $1 million over the period of three years from the Ethos Water Fund. These NGOs used that money to help support water, sanitation and hygiene education programs in water-stressed African communities, according to Starbucks. Collectively the expected benefits were estimated to help 54,000 people get access to clean water that previously did not have access.

CARE and Project Concern International were chosen to obtain these grants due to their emphasis on sustainability. Also, due to their agreement to not only provide access to clean water for villages but also to empower local residents to become part of the long-term solution.

These NGO’s were only able to do these fantastic acts of service through Ethos Water Fund. Howard Schultz, CEO, president and chairman of Starbucks, said “When our customers choose to buy Ethos water, they’re improving the lives of people who lack vital resources.”

The effect Ethos water has had around the world is incredible, one single man’s idea which ended up helping thousands.