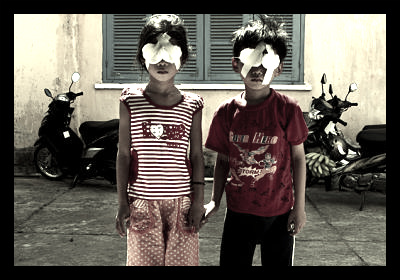 Vitamin A deficiency happens when children do not receive enough of the foods rich in the nutrient. Orange foods such as carrots, oranges, eggs, liver and sweet potatoes contain this powerful nutrient. Due to poverty, many children have a hard time attaining foods such as these. Lack of foods, along with lack in breastfeeding, which provides vitamin A, results in childhood blindness that cannot be reversed.

Blindness affects 1.4 million children every year; over 50 percent of these children end up dying within 12 months of losing their sight.

The half that do end up surviving end up leading a lifelong struggle with the disability. According to the United States Agency for International Development (USAID,) impoverished families who have blind children have a harder time getting out of poverty then those who do not.

Time that is otherwise used to rise out of poverty is spent caring for the child. It is unnecessarily harder to care for a child who has suffered blindness due to the fact that resources are not attainable. Approximately 90 percent of blind people in developing countries do not have resources available to them. This includes visual aids, services and eye wear. In addition, health care workers are spread thin throughout lower income countries.

Approximately 85 percent of blind children do not attend school. This is usually because parents become fearful of children getting hurt or embarrassed. All of this adds up to a lower quality in life. According to the USAID, children receive a poorer education, suffer isolation, and increased poverty.

All of these attributes follow children into adulthood, where they continue to struggle with lack of employment opportunities and social skills. This eventually creating extra  burdens for the family of blind adults who are unable to function properly and provide for the family. Usually this leaves younger children to care for their blind parents and quit school to do so, adding to the cycle of poverty.

The cost of vitamin A supplementation is a small price for life. Astonishing this cost is the amount someone would pay for a piece of candy (5 cents.) According to the World Health Organization, supplementation would reduce child mortality by 34 percent. Other preventions to childhood blindness are linked to measles.

When programs are promoted in vaccinating against this disease, blindness is lowered. From efforts through these measures, an estimated 1.4 million death have been prevented since 1998.Wonderful news for the poverty stricken areas suffering from lack of vitamin A; however, over 250 million children under the age of 5 still lack access to the vital nutrient and become vitamin A deficient each year.

Even with the continued effort toward combating childhood blindness, more needs to be addressed. There seems to be a cycle of poverty and blindness repeating over and over. More resources and aid should be put toward programs helping the blind instead of trapping them in a constant cycle of poverty.