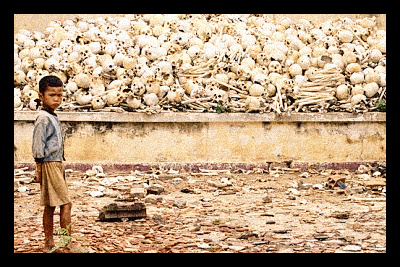 “I looked at them and I thought: ‘You are so lucky! You’re dying now. You’re going now, you’re not suffering any more. I am the one who’s still alive here and I don’t know what’s going to happen to me’.”

These painful words came to bare as Sokphal Din recalled to The Guardian his dark emotions as he held his grandmother and 4-year-old brother in his arms as they took their last breaths.

Though Din survived, his family members were some of the more than two million victims of the Khmer Rouge’s brutal Communist rule in Cambodia. The Khmer Rouge took charge of the country in 1975 under the leadership of Pol Pot, an avid admirer of the Chinese and Maoist communism. Inspired by fundamental Marxist-Leninist ideologies, the Khmer Rouge instigated a radical transformation of the nation: “They wanted to transform Cambodia into a rural, classless society in which there were no rich people, no poor people, and no exploitation,” according to the Cambodia Tribunal Monitor.

That mission may sound utopian, but it led to a severe deprivation of basic human rights, including the abolition of money, religion, private property and free markets. The regime forcibly relocated people from the cities to the countryside to work the fields. Under strict production guidelines that required a 12-month harvest season, many were forced to work more than 12 hours per day with little food and no time for rest. These ‘killing fields’ claimed the lives of nearly two million Cambodians.

The Khmer Rouge also imprisoned and executed hundreds of thousands that were considered impure and unqualified for the work of the revolution. Intellectuals, city dwellers, minorities and other ‘traitors’ of the Communist party were detained and tortured in some of the most brutal prisons. “The most important prison in Cambodia,” said the Cambodia Tribunal Monitor, “known as S-21, held approximately 14,000 prisoners while in operation. Only about 12 survived.”

In just four years, the Khmer Rouge’s genocide of its own people claimed more than 20 percent of the Cambodian population and left thousands more orphaned, widowed or stranded in other nations as refugees. Despite these atrocities, reconciliation is possible. “They say that time heals all wounds,” says Youk Chhang of the Documentation Center of Cambodia to National Geographic News. “But time alone can do nothing. You will always have time. To me, research heals. Knowing and understanding what happened has set me free.”

Several institutions and programs, such as the Documentation Center of Cambodia and Yale University’s Cambodian Genocide Program, approach research and education as the best way to reconcile crimes such as those committed under the Khmer Rouge regime.