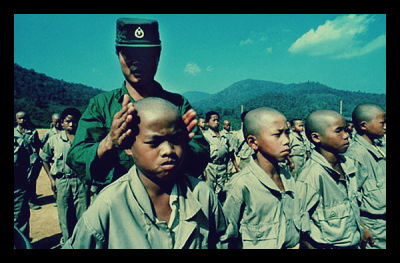 With over 400,000 soldiers serving in the national army of Myanmar (known as Tatmadaw Kyi), it’s nearly impossible to estimate the number of child soldiers hidden among the hundreds of base camps all over the country – nor is it easy to track down the ones that have been reported. In 2011 the International Labour Organization (ILO) reported that it had received 236 complaints of child soldier recruits, and that in response to these complaints 57 underage soldiers had been released.

Children find their way into combat when they run out of other ways to feed themselves, when they are forced at gunpoint to accept a forged birth certificate and enlist, when they are dropped off by their families to be taught discipline, or when they volunteer for any number of nationalistic reasons. Regardless of how they get there, all are under violation of the UN’s Optional Protocol to the Convention on the Rights of the Child, which sets the minimum age of volunteering for armed combat at 18.

In June 2012, Myanmar’s Ministry of Defense signed a joint Action Plan with the UN that promised to work toward the release all of its soldiers and guards under 18, as well as prevent future underage recruits. The army also stated that they meant to assist the released children in attending school or finding civilian employment, as well as providing the necessities for their trip back home.

The plan was set to be implemented within the first 18 months of it being signed, and within that time, a total of 272 children, as well as adults who were recruited as children, have been released. Moreover, while the act is now due to be extended, representatives of the UN are planning to meet with armed groups across the country to discuss and encourage more releases.

As Human Rights Watch (HRW) representative Smith suggests, “The real test [of Myanmar’s dedication to eradicating underage soldiers] will be if the army is willing to give full access to the UN and hold soldiers and officers accountable for falsifying documents, and for other crimes related to the recruitment of child soldiers.”

Since the signing of the Action Plan on behalf of the Country Task Force on Monitoring and Reporting of grave violations of child rights in armed conflict (CTFMR), actions have been taken against 40 military officers and 229 military personnel for their role in the recruitment of underage soldiers.

While the UN praised this as a “historic step” toward ending the practice of using children in the military, Myanmar still employs more child soldiers than nearly any other country, and the work of eradicating all involvement of children in armed forces is far from over.