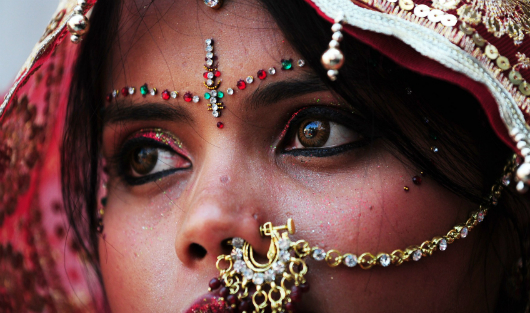 Each year, approximately 15 million girls under the age of 18 are forced into marriage. These child brides normally have their husbands selected for them by their fathers, and they are not given any power or choice when it comes to their marriage. Many of them are forced to marry men much older than they are.

Child marriage is most prevalent in Sub-Saharan Africa and South Asia. India accounts for one-third of the total child brides worldwide, even though the legal marrying age in India is 21 for men and 18 for women, as established by the 2006 Prohibition of Child Marriage Act.

Societal traditions and norms allow child marriage to persist despite its illegality. Many brides are forced to marry early because the later they are married, the larger their dowry will have to be. It is still common in India to give a dowry or a present from the bride’s family to the groom’s at the time of marriage, although the practice was banned in 1961.

As The Guardian states, another reason why some parents marry their daughter at a young age is because they fear that their daughter might have sexual relations when she is a teenager, therefore shaming her family and lowering her chances of getting married later on. Child marriage is also widespread because poor families realize that marrying their daughter means that they have one less child to feed, since brides tend to go live with their husband’s family.

Since child marriage is illegal, weddings normally take place in the evening or at night. Police officers are bribed to not report the marriage.

The consequences of child marriage are devastating. Girls who marry young are not able to complete their education and are therefore forced to rely on their husband and his family. Even on the rare occasion that they have the chance to end the marriage, they are often not able to because they have nowhere to go and no way to support themselves. Girls under the age of 15 are also five times more likely to die in childbirth than those over the age of 20. Young brides are also more likely to contract HIV because they are forced to marry older men.

The International Center for Research on Women reports that girls in India who marry under the age of 18 are twice as likely to experience domestic violence. Child brides also experience sexual abuse, and many suffer from PTSD and severe depression.

Some girls are forced to enter a marriage agreement at an extremely young age and then go to live with their husbands when they reach puberty. This was supposed to be the case for Santa Devi Maghwal, an Indian girl from Rajasthan who was married at 11 months old and told that she would have to live with her husband when she turned 16. Maghwal is currently working with child right’s campaigner Kriti Bharti to annul the marriage. Luckily, Maghwal is not the only one who has turned to the law in order to end her marriage. Bharti made history in 2012 when she obtained India’s first annulment of a child marriage for sixteen year old Laxmi Sagara. Since then, Bharti has won 27 more annulments. While divorce is hard to come by in India, since courts are overburdened and take a long time to rule, annulments can be achieved as long as there is some proof — such as a birth or school certificate — that the bride was married before the age of 18.

Bharti has made progress, but India still has a way to go before it can truly end child marriage. For child marriages to end, societal norms and patriarchal customs need to end as well.