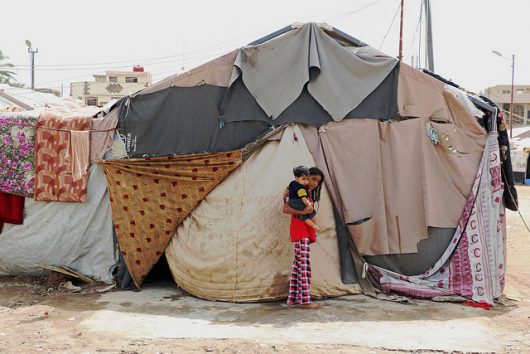 Although it is abundantly wealthy in oil reserves, Iraq’s weak government and chronic political unrest are two of the main issues fueling the country’s poverty rate of 18.9 percent. Other causes of poverty in Iraq include a lack of investment in stable education and healthcare systems. The nation’s infrastructure is also deteriorating. While the economy was steadily improving before 2012, the development and destruction caused by ISIS (Islamic State of Iraq and Syria) have set the country back.

While Iraq is by textbook definition a democracy, the nation is shrouded with instability. It has a history of harsh oppression, violent neighboring countries, and an inherent lack of women’s rights. This volatility makes it impossible to maintain a strong central government. Consequently, poverty-decreasing programs are impossible to enact.

ISIS’s Role in Poverty in Iraq

The work of the CPS campaign was incredibly effective. However, ISIS’s emergence has created obstacles in Iraq’s path towards improvement. While unemployment was at a record low in 2014, it climbed back to 16 percent in 2016. This high rate is yet another addition to the causes of poverty in Iraq.

Organizations such as the World Bank and UNICEF have only increased their presence in Iraq since the conflict and its ensuing destruction began making international news.

Much of their current work aims to help children, as one-fourth of Iraq’s children are living in poverty. UNICEF works to provide vaccinations and medical care to communities where this is prevalent.  A new World Bank initiative seeks to promote the inclusion of conflict-affected children in Iraq, both socially and with regards to their education. With the help of generous international organizations, Iraq is doggedly continuing to improve the welfare of its citizens.