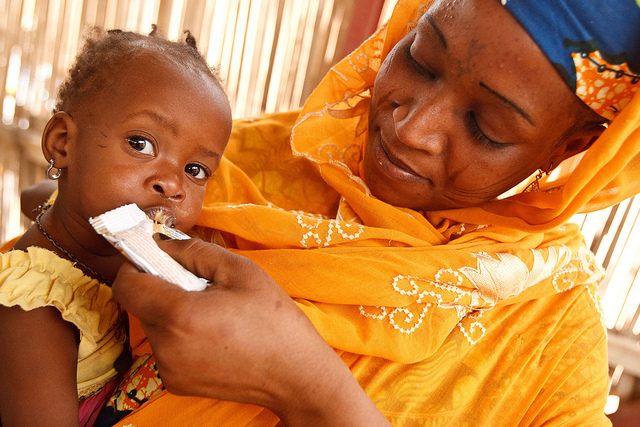 Niger is a landlocked country in sub-Saharan Africa that struggles to feed its population. Three major factors that contribute to hunger in Niger are overpopulation, scarce water supply and armed conflict.

The food crisis in Niger is made worse by the staggering birth rates of the region. With an average of 7.6 children per woman, Niger’s population is growing fast.

This growth raises questions regarding how to feed these children. An estimated 2.5 million people have no secure source of food.

Niger has poor access to contraception, so the population is likely to continue increasing and put more strain on its already meager food supply.

Nigerien president Mahamadou Issoufou is working with the African Development Bank (AfDB) to better modernize the infrastructure of the country in an attempt to feed the growing population.

“We have launched the Nigeriens Nourish Nigeriens initiative, aiming to reduce poverty — which mainly affects women and rural populations — to 31 percent and enabling the complete eradication of hunger in Niger by 2021,” Issoufou said.

Niger is a landlocked country located just beneath the Sahara Desert. As a result, finding access to water can be difficult.

Niger’s food sources are vulnerable since the country relies heavily on subsistence rain-fed agriculture. The variance in rainfall and the harsh climatic conditions contribute to the chronic food insecurity.

AfDB president Akinwumi Adesina addressed members of Niger’s government on Sept. 26, 2017, in an effort to show how the AfDB plans to help mitigate the lack of water.

“I am convinced that the construction of the Kandadji dam, one of the projects we are financing here in Niger, will enable your country to overcome challenges in agriculture and energy. Once complete, the Kandadji dam will produce 1.5 billion square meters, 125 megawatts, and will allow about 45,000 hectares of land to be irrigated.”

Ongoing Boko Haram-related conflict has caused an influx of Nigerian refugees. Population displacement has left locals in the Diffa region of Niger food-insecure.

Boko Haram, the Islamist extremist group, has rampaged across the region for years, forcing more than two million people to flee their homes and farms. Across the border of Niger and Nigeria, trade has come to a halt. Markets have shut down because vendors have nothing to sell.

Because of Boko Haram-induced terror in Nigeria, refugees flee north into Niger. This places even more stress on the overpopulated and food-insecure country.

Farmers in Niger and Nigeria have begun to change their tactics, planting crops that lay low to the ground so as not to be easily spotted by raiding soldiers. However, this is a desperate solution to hunger in Niger that only direct actions from world powers can fix.