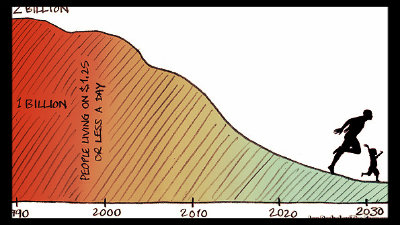 So, who is to thank for helping curb poverty around the world? Certainly, the leaders who proposed the Millennium Development Goals have contributed by raising awareness about the problem of poverty and encouraging advocacy by creating goals. And without a doubt, the nonprofit organizations that have raised money and volunteered to help raise less than privileged people out of extreme poverty should be applauded. But, the most significant hero in this scenario maybe capitalism.

One of the best ways to help people is to teach them how to help themselves. Sending food, medical care, and other supplies to help the poor helps greatly, but not as much as helping a country grow so that they can create their own food, become doctors to care for the sick, and buy or make their own supplies. When a country’s entire economy grows, individuals’ financial outlooks begin to look brighter as well.

China is a prime example of how capitalism is helping to end global poverty. The country has one of the most impressive “rags to riches” stories, bringing 680 million people out of extreme poverty from 1981 to 2010. Furthermore, a staggering 84% of China’s massive population used to live in extreme poverty, and that number has now been reduced to 10%. Most of the reasoning behind this incredible transformation lies in the fact that China’s productivity level drastically increased towards the end of the 20th century, supplying people with jobs to bring them out of extreme poverty.

There is much more to global poverty and the methods of ending it than simply providing jobs through capitalism. There are major issues with inequality and government systems, for example, and there’s not always a simple answer. But, growth remains one of the most significant ways to help a nation lift and keep itself out of extreme poverty.