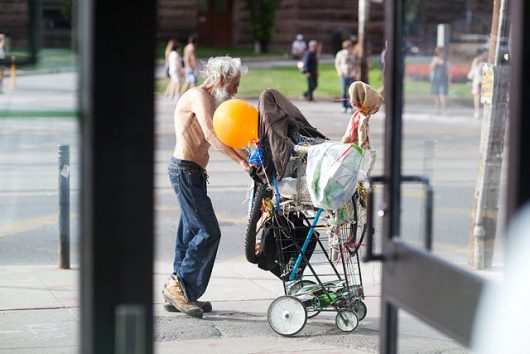 Although Canada stands as one of the world’s wealthiest nations, with above-average health care and education systems and a strong government, there is one deficit – its unbelievably high poverty rate. In fact, it was estimated in 2009 that 1 in 10 Canadians lived below the poverty line and half of Canadians were subsisting on less than $25,400. This is substantially less than a typical comfortable wage, which is $50,000. For a nation with a GDP of $1.674 trillion, the 17th best in the world, this number is startling. Considering Canada’s wealth, how can they use their financial situation in order to improve the lives of the nation’s poor?

There is no simple solution that can launch the impoverished into a better financial situation. Positive programs must be introduced in order to build a community that is focused on upward mobility and even then the process can be difficult. However, there are some proven methods to help decrease the homeless population and feed citizens who are hungry. The most important avenue towards lowering Canada’s poverty rate is through government assistance programs. As of 2014, Canada spent 15 % of its federal budget on welfare programs that include disability, housing, education, family and pension benefits.

Government aid in Canada is split into two categories: social security programs and social and welfare services. The first, social security, is used as a generic term referring to many different programs from health and education to family assistance, unemployment and old-age benefits. Old age social security benefits are especially helpful in Canada. The country’s Public Pensions System has three efficient components that ensure elderly citizens do not suffer in poverty. The first, Canada Pension Plan (CPP), is a compulsory and earnings-related program that provides income for retired and disabled workers and survivors. This is a very similar system to the United States’ Social Security program. However, the other two components of the Public Pensions system go a step further. Old Age Security (OAS) is nearly universal and is financed from general revenues and paid to almost every Canadian over the age of 65. This provides an extra step to make retirement more comfortable than the income supplied through the CPP.

Finally, the last component of the Public Pensions System tackles poverty head-on. The Guaranteed Income Supplement (GIS) is a benefit program that pays non-taxable income to low and moderate-income citizens over the age of 65. This guaranteed annual income is vital to keeping the elderly population above the poverty line, and Canada’s poverty rate relatively manageable. However, it could also be useful for the rest of Canada’s working population in the low to moderate-income bracket. Since this program is not financed by tax revenue, it would not hurt the rest of the population, and it would be a way for state and local government to use their revenue to truly help the citizens who are in need. This program only finances workers and retired former workers, so there would also be an incentive for Canadian citizens to work, rather than live off of government welfare.

While these social security programs provide benefits for all and are helpful at helping Canadians rise above the poverty line, the government’s social welfare or “personal” services are also available. These services operate under the assumption that, in order to ensure that Canada’s poverty rate continues to stay low, communities need to invest in their fellow citizens. Community-based services include daycare, home-delivered meals and even counseling. Through these programs, the government has developed the tools necessary to lower the poverty rate and keep its citizens happy and healthy. From healthcare to unemployment benefits, there are resources in place for Canadians at any time of their lives.

While Canada’s poverty rate is still relatively high, there is room for positive growth. If the government continues to invest in its citizens and Canadians invest in each other, there is a great chance that the poverty rate will continue to drop, and Canada will become an example for the rest of the world.