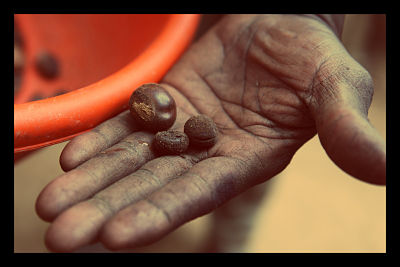 Coffee, cocoa, and other major products have become the food faces of the fair trade market. Soon, shea butter may well be added to those ranks. But what does this mean for shea butter workers and farmers?

Grown in the Sahel region, farmers extract shea butter from a small almond like nut which grows on the karite tree. From South Sudan to the western shores of Senegal, shea butter extraction provides major labor employment opportunities for women.

Shea butter, used mostly in the cosmetic field, provides multiple dermatologic benefits. These include healing burns, ulcerated skins, stretch marks, and dryness by moisturizing the skin. Recently, the Shea Butter Trade Industry hosted its first conference in North America. The event allowed African producers to meet with L’Oreal, the Body Shop, and other cosmetic industry players. With an expanding demand for shea butter, the creamy exfoliant has potentially reached a level that allows African producers to negotiate fairer prices for their labor.

Currently, the extraction and production of shea butter employs millions of women on in Africa. To access the butter, the nut is crushed. It is then boiled, cleaned once more, packaged and sold in local markets or exported. Despite the individual preparation of shea nuts, women create cooperatives to sell their product in their local markets.

With a rise in demand for their product, many women have also found an increase in income. Empowering women both in their own household and community has given rise to shared decision-making in family and community structures. This sense of freedom through successful employment is set through a traditional service, and many daughters learn it from their mothers who pass down the craft.

But not only do prices and gender equality rise with demand, fair trade over the production market rises as well. As the popularity of shea butter and other new products have reached new levels, Fair trade organizations such as Fairtrade International, have set their efforts towards promoting fair prices that protect producers. “Fair trade addresses the injustices of conventional trade, which too often leave the poorest, weakest producers earning less than it costs them to grow their crops. It’s a bit like a national minimum wage for global trade. Not perfect… but a step in the right direction.” stated Harriet Lamb, CEO of Fairtrade International.

However, there are others that do not believe farmers and laborers benefit from fair trade, citing that there is little evidence of their benefit. Philip Booth, Editorial and Program Director at the Institute of Economic Affairs, contends that “no clear evidence has been produced to suggest that farmers themselves actually receive higher prices under fair trade. Fair trade may do some good in some circumstances, but it does not deserve the unique status it claims for itself.”

Despite a difficulty to decipher between marketing and real action, quantifiable claims made by companies such as L’Occitane, allow agencies to verify what companies claim. Unlike your average marketing attempts, L’Occitane’s claims have been analyzed and reported on by the United Nations Development Program (UNDP). The written report detailed L’Occitane’s collaboration with 15,000 rural women producers, paying $1.23 million in revenue each year to their shea butter laborers.

Sources: How We Made it in Africa, Alaffia
Photo: Tree Aid