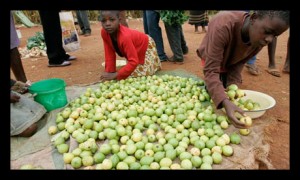 In 2005, the World Trade Organization (WTO) launched its Aid for Trade initiative, which works to reduce poverty in developing countries through trade. In most developing countries, supply-side and trade-related infrastructure problems hinder the ability to participate in international trade. The Aid for Trade initiative works to educate governments on the potential for trade to work towards development.

The World Trade Organization has managed to raise $200 billion worth of funding for the initiative that will go towards resource mobilization, the mainstreaming of trade into development plans and programs, regional trade integration, private-sector development, and the monitoring and evaluation of Aid for Trade. Emphasis is placed on gathering support and resources to counter constraints that deter trade in developing countries. Aid for Trade works on the assumption that “a rising tide floats all boats,” meaning that as national wealth increases, the poor will profit as well.

Some NGOs, however, question the viability of this method in reducing poverty. A study was commissioned by Traidcraft and the Catholic Agency for Overseas Development to look into the real impacts of these projects on the poor. Saana Consulting reported that most of the funding had gone to middle-income rather than low-income countries. They had also found that the program had little impact on the poor, calling the assumption that it will have an effect “a leap of faith.”

Donors have admitted that impacts are indeed difficult to track. Adaeze Igboemeka, head of Aid for Trade at the UK Department for International Development, concedes that there is indeed a lack of information, as the programs impacts on poverty are seemingly indirect.“The assumption,” Igboemeka said, “is – and there is a lot of evidence to support it – that if a country is able to trade more, it will grow, and that will create jobs and increase incomes and lead to poverty reduction.”

The consensus seems to be that, generally, trade is good. However, for now, there is not enough information and time to accurately project its impact on poverty reduction.