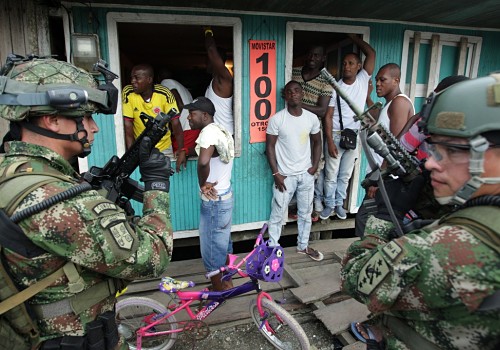 Buenaventura, Colombia, home to approximately 300,000 residents, has consistently been ranked one of Colombia’s (and South America’s) deadliest cities. It is home to the nation’s highest homicide rate at 144 murders per 100,000 people—more than seven times the rate of the nation’s capital, Bogota. In this seaside port town, fishermen and gang members have lived together in a fatal balance for years, contributing to the town’s notorious reputation. In recent months, however, the level of violence has exploded, leading many residents to leave the city in search of a safer life elsewhere.

Colombia has been described by some as a country with two faces: one face is the Colombia of the elite and wealthy, while the other is a Colombia marked by violence, gang lords and a vicious drug trade. Once considered too dangerous for visitors due to a brutal civil war between various factions of the government and paramilitary groups, which began in 1964, Colombia has since cleaned itself up, with major cities like Bogota and Medellin now considered hot-spots for tourism. Despite massive improvements that have benefitted the country in recent years, as of 2013 an astonishing 30.6 percent of the population was living below the poverty line, according to the World Bank. Colombia also remains the world’s largest cocaine producer, supplying 90 percent of the cocaine consumed in the United States.

Buenaventura, a port town located on the Pacific Coast, is a perfect example of the way in which these “two faces” can collide.

On the one hand, Buenaventura struggles with a legacy of violence that continues to characterize the culture of the city today. During the 1980s, the city was a battleground between leftist guerrillas of the Revolutionary Armed Forces, or FARC, and right-wing paramilitary groups. When the FARC were driven out, paramilitary groups established themselves and began to engage in gang activity, helping to carve the city into rival gang territories and the port into an important regional focal point for the export of cocaine. According to a Human Rights Watch report, these groups have taken the lives of many Buenaventura residents, who are often dismembered in so-called “chop houses” for unwittingly crossing between gang territories.

On the other hand, due to its strategic location on the coast, Buenaventura has recently become the centerpiece of a government strategy to increase Colombian trade with Asian and Western countries on the Pacific, such as the United States, Chile, Mexico and Peru. To achieve this goal, the central government in Bogota has invested millions in development projects, such as the construction of a container port and industrial park, as well as the construction of a major waterfront development project that authorities hope will help attract tourism.

Residents, however, have argued that there is a link between the recent rise of violence in the city and the development projects. Locals, for instance, point to the fact that much of the violence has been concentrated in and has affected locals living in areas along the port. Residential habitation of the area obstructs government plans to turn the area into a tourist destination.

In response to protracted levels of violence in the town, which has recently received increased media attention, Colombian President Juan Manuel Santos finally intervened last year, sending in an emergency infusion of cash as well as police officers from the capital.

According to Colonel Marcelo Russi, the police commander in Buenaventura, the added law enforcement has helped to dramatically reduce the murder rate and number of disappearances in the city. Alexander Micolta, the executive president of the Buenaventura Chamber of Commerce, however, has stated that not enough is being done to effectively eradicate violence from the city. “Here, everything that has to do with the port advances. But the city doesn’t advance,” Micolta said.

In order to save Buenaventura, it is evident that money invested in the city needs to be focused on protecting the people who actually live there instead of in efforts to attract foreign investment and tourist capital. Otherwise, the city’s long history of violence and gang activity will continue to perpetuate itself and invade every corner of the city once the police presence leaves. If that happens, then Colombia’s “two faces” will persist to rear their ugly heads in tandem in the country’s small, sea-side city of Buenaventura.