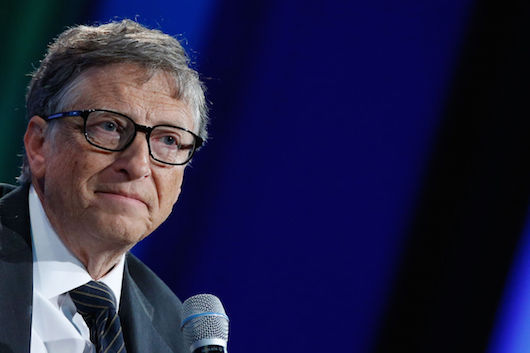 Paris hosted the global climate conference with heads of government and businesses in attendance. This was the 21st conference of this kind, and many maintain that it was the most productive thanks to Bill Gates’s Breakthrough Energy Coalition.

At the climate event, known as COP-21, Gates announced his plan to help address climate change. It is a collection of some of the most influential entrepreneurs, and it is known as the Breakthrough Energy Coalition.

The coalition, led by Gates, pledges to work in tandem with national governments to increase funding for clean energy research. They will also invest in risky clean energy projects that have a long return on investment but a high potential for success.

Many of the ideas coming from existing clean energy research and development are too insecure for traditional investors. They do not want to put money into an idea that might never make it to the market. This difficult journey from innovative idea to commercial product is known as the “valley of death,” and Gates’s coalition plans to bridge it.

The Breakthrough Energy Coalition will invest in those risky ideas and be patient with the returns. Gates cites flow batteries and solar paint as two such existing products that need private sector investment. If successful, solar paint could transform any surface into a solar panel.

A crucial component of this plan is national governments. The research and development for clean energy technology must start with the government because only they have the mandate and resources to do so. Business alone cannot lead the charge.

The public sector initiative is known as Mission Innovation, including 20 nations. Each participating country agrees to double its existing funding for clean energy technology within the next five years.

This pledge will increase the budget of the 20 nations to $20 billion for clean energy. These new funds will go to research and development, and the creation of new ideas and technologies.

Gates’ Breakthrough Energy Coalition will then use their business acumen to wisely invest in technology that has the greatest potential. With patient and consistent investment, the products will bypass the “valley of death.”

These historic investments from government and businesses reflect the urgency for action. Both realize the impact climate change can have on their respect areas. It can cause unrest and war for governments, and a loss of profits for businesses.

The developing world, though, has the most to lose. Man-made climate change is primarily caused by industrialization from the developed world, but affects the developed world in a greater magnitude. This harsh irony will be reduced with the teaming up of the Breakthrough Energy Coalition and Mission Innovations.

Clean energy will allow the developing world to grow and avoid the ravages of climate change. Bill Gates’ Breakthrough Energy Coalition will not only address climate change, but also fight poverty.