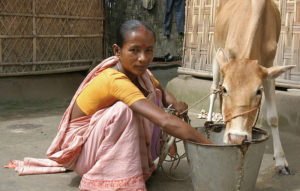 In the past decade, microfinance has soared as a strategy to alleviate poverty. BRAC International, one of the world’s largest nongovernmental organizations, supports microfinancing in seven countries in Africa and Asia. Importantly, BRAC’s microfinance program supports people to engage in financial activity to overcome poverty.

Microfinance is a financial practice that lends small sums to people with few means to support their small businesses. The goal is for small businesses to earn a profit and then pay back the loan. The microfinance institution then loans the capital out again. Through this cycle, people are able to rise out of poverty. Microfinancing frames poverty as the deprivation of the ability to participate in economic and political processes. By that logic, if people can obtain microloans, these individuals will engage in financial activity and overcome poverty.

Studies have only found limited evidence of the efficacy of microfinancing at eradicating poverty. However, the practice is far from a failure. Specifically, the capital lent to the impoverished provides stability in their lives, easing the day-to-day anxiety about monetary shortages. In addition, studies have found that people who take out microloans are motivated to invest more time into their businesses. Though not miraculously transformative, microfinancing has achieved overall positive results in reducing poverty.

Sir Fazle Hasan Abed founded BRAC in 1972 to help refugees from the Bangladesh Liberation War. Since then, BRAC has created eight programs to empower people suffering from poverty, social injustice, illiteracy and disease. Microfinance is one of the eight programs of the organization. BRAC believes that the financial inclusion of impoverished people and communities is an essential step toward ending poverty.

More than 660,000 people benefit from BRAC’s microfinance program, which operates in Bangladesh, Myanmar, Tanzania, Uganda, Rwanda, Sierra Leone and Liberia. Along with loans, BRAC also provides financial literacy training to the borrowers. This teaches borrowers to be responsible with money and make better financial decisions. In addition to microfinance services, the organization also provides communities with programs like agriculture classes, youth education and health care. When paired with these programs, microfinance has an even greater impact on communities.

More than 96% of BRAC’s borrowers are women. One female entrepreneur, Kadiatu Conteh from Sierra Leone, exemplifies how BRAC impacts its beneficiaries. Conteh’s sister introduced her to BRAC. At the time, Conteh’s family was struggling to make ends meet and she was trying to earn money by selling drinks with only a cooler. Conteh took out a loan and invested the money in more beverages for her business. Slowly, she increased her profits. After four years with BRAC, she accumulated enough funds to invest in her own store where she now sells household items.

Selina Karoli Fissoo also benefited from BRAC’s microfinance program. With other women in the city of Arusha, Tanzania, Fissoo formed a microfinance group to receive loans and financial literacy training from BRAC. She invested her first loan into her small grocery business, and as her profits increased, she applied for larger loans. After more than 10 years of working with BRAC, Fissoo has a large retail store and even dabbles in poultry farming.

The Benefits of Microfinance to Alleviate Poverty

Conteh and Fissoo are just two of hundreds of thousands of entrepreneurs who have prospered from the help of BRAC’s microfinance programs. Microloans provide stability in the lives of the impoverished and can motivate people to invest more time into their businesses. Especially when coupled with other programs, microfinance is an effective method for alleviating poverty.