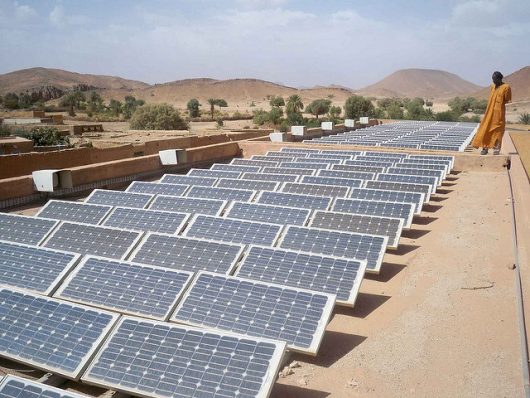 Africa is a goldmine of resources, yet reliable electricity is only available to 30 percent of its population. For many Africans, expensive diesel generators are the only solution to the constant blackouts, costing some countries up to five percent of their GDP.

Without a steady source of electricity, students have a difficult time studying at night, businesses are restricted by the cost of generators, and countries face economic stress. As of 2016, 80 percent of South African energy came from coal, but Africa has developed numerous renewable energy projects as the nation works towards improving accessibility.

The Blue Energy Group-led Nzema Solar Power Station, for example, will raise Ghana’s generating capacity by 6 percent. By its completion, it is expected to supply 20 percent of the government’s energy goal. The Taiba Ndiaye Wind Project in Senegal builds a 158-megawatt wind farm to provide an affordable energy source for the 40 percent of the population still left without electricity.

African countries are aiming to increase their renewable energy usage; Morocco, for instance, hopes to derive 40 percent of its energy from renewable resources. South Africa partnered with 27 renewable energy producers to generate electricity for its people. Accomplishments like these have been made throughout the continent, allowing renewable energy in Africa to slowly gain a foothold.

The International Renewable Energy Agency (IREA) recorded 61,000 jobs created by the renewable energy sector in 2017 alone. Thousands of Africans are being employed in technology installation, sales and construction.

According to IREA, the renewable energy industry creates more jobs than the coal industry. Solar PV itself “creates more than twice the number of jobs per unit of electricity generation compared with coal or natural gas.” Employment is an important benefit of renewable energy, considering African unemployment rates reach up to 46 percent.

Other Energy Sources in Africa

Yet, coal and natural gas discoveries are still being made. Around 30 percent of the world’s gas and oil discoveries between 2010 and 2014 were made in Sub-Saharan Africa. And while these discoveries do help towards improving energy accessibility, their long-term effects on climate change may be harmful, especially for poorer populations.

Decreased crop yields may cause a 12 percent increase in food prices by 2030, a haunting statistic with Africa’s undernourishment rates being one of the highest in the world.

Decreased water accessibility, increased risk of malaria and diarrhea and increased natural disasters may all arise from climate change. Flooding and desertification are already becoming prevalent in certain parts of southern and west Africa, demonstrating the importance of renewable energy in Africa.

Renewable energy in Africa has high potential, especially with the amount of constant sunlight it receives. A report by GSMA stated that solar energy has a potential of 656,700 TWh.

With this mass of resources, Africa would be able to independently source its energy rather than rely on other countries to do so. New and existing renewable energy projects push Africa in a sustainable direction while encouraging economic development.

Renewable energy also aids the impoverished through increased jobs and improved electricity access. All in all, Africa’s energy movement is a success story in the making.