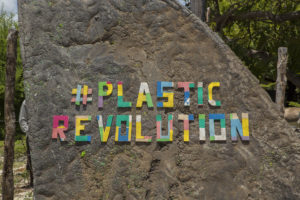 More than 12 million metric tons of plastic are dumped into the oceans annually, and it costs at least $8 billion in damage to the marine life and environment.  Single-use plastic items like grocery bags, drinking bottles, straws and foam takeaway containers comprise the majority of waste. In developing countries, between 400,000 and 1,000,000 people die every year from diseases  related to mismanaged plastic waste. Kenya has taken a radical step in eradicating plastic pollutants and helping its citizens understand the danger of polythene bags. The country is also home to The Flipflopi. The Flipflopi, a large boat made of plastic, serves as a pledge to end the single-use plastic crisis and is a symbol for a brighter and more sustainable future.

Because Southeast Asian countries mismanage 75% of their plastic waste, 60% of marine pollutants come directly from just six different countries. Of this litter, 80% is made of plastic, and it forms large gyres in different oceans around the world. There is an alarming trend of whales dying from ingesting fatal amounts of plastic. Other marine animals suffocate and get entangled in plastic debris and are poisoned by the toxic plastic particulates. Less than 10% of the total amount of plastic ever produced – almost 10 billion tons – has been recycled.

In August 2017, the Kenyan government banned plastic and imposed strict laws against plastic bags. At the time, Judi Wakhungu served as the Cabinet Secretary for Environment and Regional Development Authorities in Kenya. With Wakhungu’s help, Kenya embarked on the long-overdue journey of reducing plastic pollution. Now, the imposed punishments for single-use plastic ranges from four years in prison to fines up to $40,000.

In 2015, travel and tourism generated 59% of Kenyan GDP, and the GDP is expected to reach $4.2 billion by 2026. However, Nairobi’s coastlines, the heart of Kenya’s capital and a famous tourist destination, are starting to become polluted with plastic waste. They must be protected at all costs to maintain tourism and GDP growth. Because plastic blocks waterways and ends up in drains, it serves as a direct cause of flooding in developing countries that have poor sanitation facilities. Two billion people live in areas with trash buildup due to the lack of waste removal systems. The trash gets trapped in waterways, causing severe pollution, illness and even death.

The Flipflopi boat made of plastic tackled exactly this issue. It created a system of converting plastic into something valuable. In fact, it is on a mission to reuse all generated plastic creatively until there is a worldwide consensus on stopping its usage.

In 2016, Ben Morison, Ali Skanda and numerous volunteers began building a nine-meter sailing dhow, all made out of more than 10 metric tons of plastic waste and 30,000 pairs of recycled flip-flops collected on beach cleanups in Lamu. A dhow, which is a traditional vessel with one or two masts, has always been the icon of the Kenyan coast and has sailed the Indian Ocean for more than 2,000 years. The Flipflopi is the first entirely plastic sailing dhow that was launched on September 15, 2018. Coincidentally, its launch fell on International World Cleanup Day.

Morison, who is a tour operator in Lamu, Kenya, understood that plastic pollution is not only damaging marine life but also to Kenya’s tourism. Because more than three billion people wear flip-flops, Morison wanted to make a call to action. In 2016, he reached out to the master craftsman, Ali Skanda, and recruited a team of volunteers to make a change. Two years later, the project came to life, and Flipflopi sailed from Lamu to Zanzibar. Its 650 km voyage marked Kenya’s fight against plastic waste and Flipflopi’s partnership with the United Nations Environment Program’s Clean Seas campaign.

In only 14 days of sailing, the Flipflopi stopped in 12 different communities and hosted seven events ranging from beach cleanups to recycling workshops. Children also attended these initiatives and were taught how to create useful objects out of empty plastic bottles. In the majority of Flipflopi’s port stops, local governments announced their commitment to reducing plastic waste and expanding recycling practices. Kibarani pledged to revive the city of Mombasa, shut down its landfill dump and plant trees in its territory. The Flipflopi was also able to secure partnerships with 22 hotels and 29 businesses in Kenya to minimize their plastic waste usage.

The Flipflopi bears the symbol of loving, appreciating and taking care of the environment. The boat made of plastic was built with no technological interventions. Because of this, it took two and a half years to complete instead of the typical five months. However, the project’s longevity demonstrates that any person can repurpose and convert single-use plastic into something as grand as a sea vessel. The boat was not built for the sake of building a boat. Instead, it serves as a symbol of commitment to make a change and give plastic a second life. The project was meant to teach the world a lesson on how plastic affects marine ecosystems, the human environment and Earth, as well as what people can and must do about it.

The Flipflopi is only getting started. Its co-founders and volunteers plan to construct a 20-meter plastic dhow and sail it to Cape Town, South Africa, not only to advocate for new worldwide policies but also to continue the legacy of traditional and sustainable dhows.

This boat made of plastic is a symbol of change and serves as a light at the end of the long plastic tunnel. It is a promise that future generations will treat the planet lovingly and kindly.