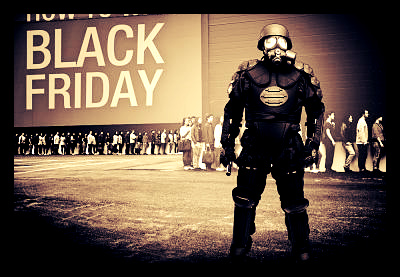 In an American tradition lasting a few years short of a century, the day after Thanksgiving has heralded one event above all others: Black Friday. Although not coined as such until the 1960s, the last weekend in November for millions of Americans now represents long lines, cheap goods, and exceptionally surly customer service.

Last year, a reported 247 million shoppers took part in the seasonal shopping extravaganza, spending $423 each, approximately $59.1 billion in total. Not to be outdone, the National Retail Federation projects $602.1 billion in holiday sales this year (From Thanksgiving to Christmas), up from $579.5 billion in 2012.

T.V.s are important, especially when they’re on sale for a limited time only. And the joy of scoring the Big Bang Theory DVD from Wal-Mart at 6 p.m. on Thanksgiving Day cannot be understated.  Unfortunately, Black Friday affects more than just the endorphins of the stalwart shopper. As the truly devoted consumer grits their teeth and fights for every last deal, the plight of Typhoon Haiyan survivors diminishes in the wake of the bustling holiday season.

Although Americans are noted for their generosity when it comes to international disaster relief, the amount of spending achieved on this one day highlights how much more could be done.

According to charitynavigator.org, in 2012 individuals donated around $223 billion to charities, comprising 72% of the $316.23 billion annual total. An entire year of donations makes up just under 40% of the total spent on Black Friday alone.

Instead of purchasing that ultimate box set collection for dad, Magic Bullet for the college student, or the absolutely essential new PlayStation 3 game for yourself, try diverting that potential spending toward charitable organizations dedicated to aid.

For perspective, as of September, a 25 kilogram bag of locally imported rice was priced by the National Food Authority as 1,880 Philippine Pesos, which converts to less than one U.S. quarter. For the amount of money expected to be spent this year, an astronomical 2.4 trillion bags of rice could be purchased for the Philippines.

For considerably less effort than it takes to brave the crowds this weekend, shoppers could divert funds to a charity of their choice. The Red Cross offers an SMS service where $10 is automatically donated to disaster relief every time someone texts REDCROSS to 90999. Every time you’re waiting in an hour-long line in the next few days, think of the good you could be doing, even from the comfort of your warm couch.