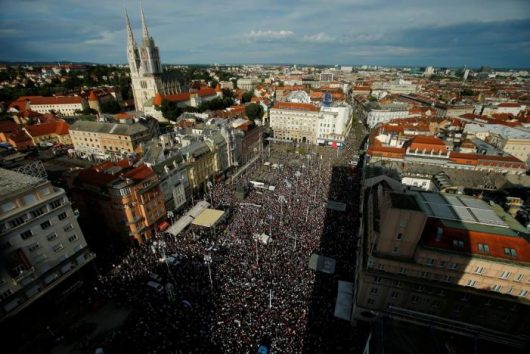 Thousands of Croatian protesters gathered on June 1 in the main square of the city to support the newly-formed “Croatia can do better!” movement. Over 50,000 people advocated for better education in Croatia after the country’s political institutions were thought to be robbing students of an adequate system.

Many graduates were deemed unprepared for the workforce amid a difficult economic climate leading up to the protest. Croatia has a jobless rate of almost 16% and the country has only recently begun to recover after a six-year recession ending in 2014.

According to the Open Society Foundations, a family of foundations committed to aiding expenditures for global struggle, “Graduates [of Croatia’s school systems] are desperately unprepared for the job market, and the current education system does not prepare citizens to play an active role in [their] society.”

Consequentially, the Comprehensive Curricular Reform began to push for better education in Croatia after the National Strategy on Science and Education passed in Croatian Parliament in October 2014. The early effects of the process for reform were led by the Expert Working Group (EWG). The group focused its energies on involving over 52 working groups and 500 teachers by presenting education as a public good with more significant political and individual interests.

However, these positive efforts were shut down after the election of a new government in January 2016. Newly appointed members of the Parliamentary Committee on Education added more members to the EWG — they convinced the Minister to reject the Parliamentary Education Committee advancements and give funds owed to members of different working groups to place the educational reform at a frustrating standstill.

The resultant public outcry quickly led to the “Croatia can do better!” movement. A responsive push for a stronger educational system gained the support of the Network of Educational Policy Centers (NEPC) and the campaign consequently gained rapid public support for the June 1 demonstration.

Marko Kovačić, a participant in the civil society in Croatia reported on the June 1 protest stating, “It was an incredible feeling to see so many people mobilize and overcome our differences in support of a better education system for Croatia. It felt empowering…[we were] united behind a better future for our country.”