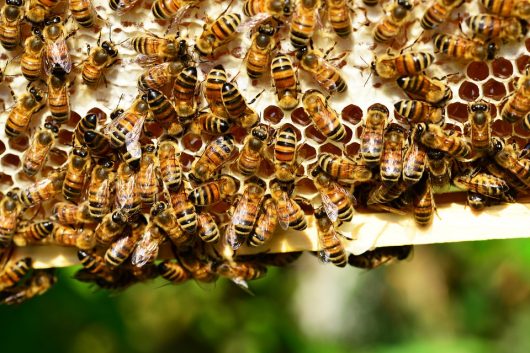 Honey continues to be a popular commodity across the globe, and poor rural farmers throughout Africa are beginning to take up the practice of beekeeping to earn money.

In Kenya, a large portion of those living in poverty reside in rural regions, as large cities such as Nairobi are beginning to prosper. Bees, and the delicious nectar that they produce, are starting to be viewed as a viable business enterprise for farmers living in the Kenyan countryside.

According to CapX, “More than 90 percent of honey in Kenyan supermarkets is imported,” which gives local farmers the opportunity to enter a practically untouched market.

However, the practice of beekeeping in Kenya has typically been popular among the elderly community, who yield small quantities of honey from hives made out of wooden logs.

To combat this trend, CapX reports, “Charities like Christian Aid are working to develop honey hubs in Kenya.” These hubs will provide education, training, modern equipment, storage and industry connections in an effort to promote the business of beekeeping and help prove that bees can end poverty for these farmers.

A similar strategy is taking hold in Tunisia, where the project TuniBee is beginning to empower local beekeepers. Students who attend the Mediterranean School of Business in Tunis, the capitol of Tunisia, began the initiative at the suggestion of Noomen Lahimer, their professor of economics and entrepreneurship.

According to BBC, “People who already keep bees to supplement the income they get from their day jobs are selected from deprived areas of the country” to work with TuniBee.

Beekeepers who participate in the program are given extra beehives that are purchased by the sponsors of TuniBee. On top of this, Khaled Bouchoucha, a beehive entrepreneur, and Hidhli Naoufel, a veterinarian, provide high-end beehives and expertise on the handling of bees to the participants.

The greatest upside to the promotion of beekeeping in Africa is the worldwide interest in the delicious golden syrup.

CapX reported, “Honey is a treasured substance among many Muslim communities.” Honey holds special significance in Islam, and countries like the United Arab Emirates and Saudi Arabia are willing to spend a lot of money if the honey is of a high quality.

In Tunisia, TuniBee has intrigued large corporations such as Total, Shell and Microsoft, that they hope will eventually act as corporate sponsors. Additionally, TuniBee has already secured one U.S. company that would like to import their honey.

The ever-growing popularity of this up-and-coming industry has led many to believe that bees can help end poverty for rural farmers across Africa.