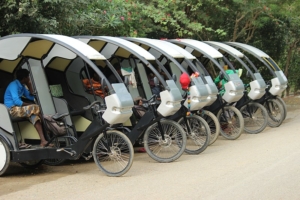 With a population of more than 1 billion, it is no surprise that India is home to the world’s largest two- and three-wheeler market. Such vehicles traditionally have internal combustion engines that use gasoline to run. However, being the third highest greenhouse gas emitter in the world (contributing about 7% of total emissions), India is desperately trying to reduce its carbon footprint. The sustainable alternative is using electric vehicles (EVs) i.e, cars that have electric motors and are powered by electricity. Not only do EVs have “zero tailpipe emission” so they are beneficial for the environment, but they also have lower maintenance costs. In an incentive to push more people to purchase EVs, NITI Aayog, the Indian government’s think tank, released a draft policy in April 2022 that strongly encourages battery swapping for electric two- and three-wheelers.

Battery Swapping and Its Advantages

Two- and three-wheel vehicles like electric scooters, mopeds or rickshaws most commonly use battery swapping. Logically, it is easier to swap smaller batteries, unlike those batteries for large four-wheelers.

Usually, EVs contain fixed lithium-ion batteries that charge by taking electricity from the grid. This process is both time-consuming and tedious. If India wants more people to purchase EVs and make the momentum towards electrification faster, then the concept of battery swapping or “exchanging discharged batteries for charged ones” is much more preferable.

Detachable batteries “de-link” the vehicle and the battery, meaning that the battery can charge anytime without the vehicle. This eliminates the need to find a charging station. It also lowers range anxiety for drivers. Importantly, battery swapping also reduces the upfront costs of EVs because the batteries are being leased and not owned. This is a significant advantage because high upfront costs have been one of the main reasons that consumers have hesitated to purchase EVs.

India’s main issue in making the adoption of EVs mainstream is the lack of proper charging infrastructure. The policy aims to change this by forming a battery swapping and charging network. Through that network swapping and charging will occur at stores, malls, parking spaces, petrol stations, etc.

An important feature of the policy includes interoperability between EVs, batteries and EV supply equipment. That allows different battery models to be compatible with different vehicle models. That, in turn, will increase efficiency. Also, maintaining safety protocols should assure people that their EVs will not burst into flames and increase demand. Finally encouraging private sectors to enter the EV market to fuel competition should also increase both the battery-swapping and EV industries.

The reason why EVs are so expensive is because of the high cost of lithium-ion batteries. That is why the draft calls for a reduction of the 18% tax on batteries so that it is on par with the five percent tax on EV supply equipment. This will make EVs a more viable option for users.

A November 2020 Council on Energy, Environment and Water report underlines the economic benefits of deploying more EVs into the market. Since electricity is cheaper than gasoline, the long-run cost of owning an EV becomes lower for consumers. These savings on fuel (estimated at $14 billion by 2030) become additional disposable income. Consumers then spend that on different goods and services. In addition, more demand leads to more production. Consequently, this generates higher employment across various sectors of the economy. Another way EVs generate employment is through greater investment in the charging infrastructure. More investment means more output from industries and hence a greater demand for labor.

Many companies already make two- and three-wheelers with swappable batteries. The startup Bounce Infinity is a notable example. It recently launched an e-scooter with a swappable battery. The company is also installing over 2000 battery swapping stations across six cities in the country. Sun Mobility and Amazon India will partner so that swapping stations will be installed at Amazon warehouses in Maharashtra, India.

The Indian government aims to have electricity power 70% of all commercial vehicles and 80% of all two and three-wheelers by 2030. As the majority of India’s population uses either of these two modes of transportation, EV usage will prove to be a cheap and environmentally green option. As Bloomberg News suggests, “If policymakers can drive investment and capital towards the startups pushing through swapping, the rising awareness and utilization will ensure consumers are prepped for more electric vehicles in the future and hooked to the longer-term cost efficiencies.”