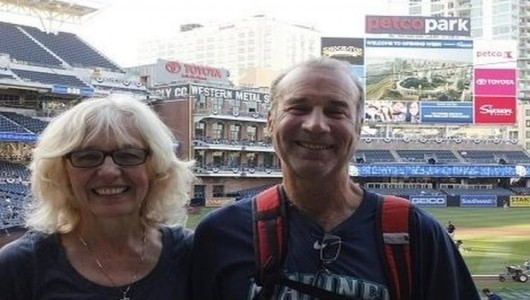 Baseball is America’s favorite pastime, and paying a visit to all 30 Major League Baseball parks in the country is surely on the bucket list of any fan of the game. Jodi and Jack Petrinovich of Washington state began their baseball road trip in April and plan to return home at the end of July, after visiting every park in the country.

What appears to be an all-American road trip at first glance, is actually much more. The Petrinovichs set out on their journey with an honorable mission: to raise awareness and spread the word about Unbound, a nonprofit organization that provides aid to people around the world living in poverty.

In 20 countries, Unbound provides the opportunity for people to become sponsors for children, young adults or elders. That sponsorship supplies families with the tools they need to become self-sufficient. By empowering others to succeed, Unbound lifts people out of poverty.

Ideally, the Petrinovichs would like to find a person at each baseball park who will sponsor a child. They themselves began sponsoring a young girl from Mexico several years ago, providing her with donations and two pen pals.

As natives of the Evergreen State, the couple generally represents the Seattle Mariners at each ballpark across the country. When the Mariners are not playing, this tends to spark conversation, providing the perfect gateway for the pair to inform others about Unbound and their admirable mission to get more people involved.

As their baseball journey reaches its final stages, the Petrinovichs have inspired 10 people to become sponsors for a child in need. The couple is lending a voice to the voiceless, hitting a major homerun in the eradication of poverty.