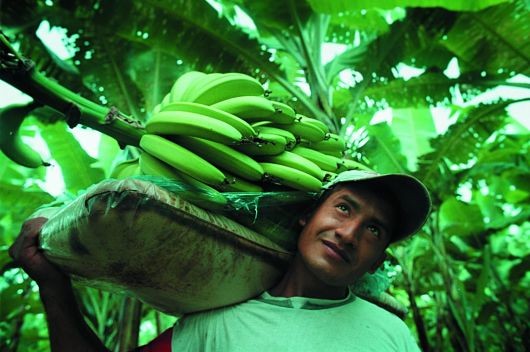 Ecuador is home to over 14 million people and an estimated 18 percent are involved in the banana trade or business. Banana sales comprise over 60 percent of the country’s GDP and Ecuador supplies almost 40 percent of the world’s bananas. These numbers help explain and prove the prevalence of non-fair trade companies.

According to TransFair USA, basic necessities for banana farmers cost $9.60 per day. This is in contrast with non-fair trade wages that can be as low as $3 daily. This has caused an influx of unlawful child labor violations, working conditions and extended hours. The Human Rights Watch has accused non-fair trade companies of employing children as young as 8 years old.

The international farming advocacy organization, Food Empowerment Project, states, “banana producers and distributors Dole, Del Monte and Chiquita have all refused to take responsibility for the conditions on plantations from which they source their product.”

These conditions have caused small-scale farmers to seek fair trade methods to help better provide for their families. For example, the El Guabo Association of Small Banana Producers cooperative started in 1998 when 14 farmers decided to take their chances by bringing a single container of bananas, totaling almost 40,000 pounds and selling directly to a European market. Their goals were to cut out all the intermediaries and deal directly with domestic and international markets.

The success of this collective business model has provided an alternative model of farming tactics and has lead other companies to adopt similar practices. International fruit companies such as Dole, Del Monte and Chiquita have sought business in other countries due to the mounting political support in Ecuador for farmers and small business. These prevailing attitudes create an environment of conditions where a fair trade sustainable fruit seller, like All Good Fairtrade (AGF), can thrive.

AGF is a banana company located in the Southwest of the country. The organization utilizes purely organic fertilizer and has banned the usage of over 100 agrochemicals typically used in mass fruit production. Furthermore, AGF is also able to pay their workers wages that are approximately $3 more per day than the average banana industry worker. The organization is supplied by over 400 Ecuadorian family farms in 15 communities, all of which are a part of the El Guabo Association of Small Banana Producers.

For each bunch of bananas sold, AGF delivers seven to ten cents back to the El Guabo collective for fair e-trade premium funding. In the five years of the company’s existence, AGF has given back over $600,000. As a community, the families vote democratically on how and where to allocate these funds. So far, the capital has been invested toward building a free medical center and a special needs school, supporting multitudes of school children and implementing various sustainable farming initiatives. Education and school supplies are also awarded to the children of the El Guabo collective.