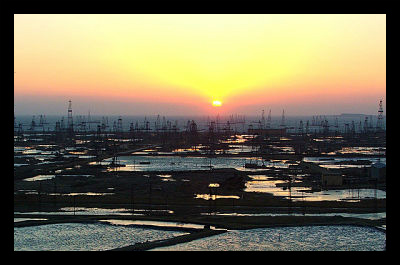 Since 2005, the Baku-Tbilisi-Ceyhan pipeline has brought Azerbaijan a newfound prosperity, but the money from the oil windfall is still tightly concentrated, and inequality remains a huge issue. Even with the enormous bounty from the pipeline, it is still a struggle for the average Azerbaijani to make a living.

Azerbaijan, a former member of the USSR, is home to some of the richest people around the Caspian Sea. Despite its lack of universities, public services, or manufacturing sectors, it has a plentiful supply of oil.

This is the first time in centuries that Azerbaijan has had a lucky break in geopolitics. It has been occupied by Cyrus the Great, Alexander the Great, the Seljuks, the Mongols, the Persians, the Russians, the Ottomans and, finally, the Soviets over the centuries. Now, finally, Azerbaijan has a chance of controlling its own destiny. Between 2006 and 2008, Azerbaijan’s economy grew at an annual average rate of 28 percent, the fastest in the world.

Many would argue that Azerbaijan is not spending its new money wisely. Instead of overhauling its creaking social security system, or investing in schools, it is building sports stadiums and luxury mega-developments. Gulnara Suleymanova, an impoverished mother living in the shadow of Azerbaijan’s brand-new stadium, built especially for the European Games, said that she can barely afford to feed her children, let alone provide them with an educated and treatment for their health problems.

Huge undertakings like the stadium and the mega-development can be argued to have some merit, as the publicity from the games and the over-the-top extravagance of the mega-developments can signal to investors that the country’s government supports growth. They serve as a kind of international billboard, advertising a friendly business climate to anyone who wants to build anything spectacular.

That being said, experts at USAID have said that Azerbaijan must diversify its economy if it wants to maintain a high rate of growth. Right now, there is too much emphasis on the extraction-sector and not enough focus on other sectors, or on investments for the future. Without movement into other sectors, a failure in the oil supply could send Azerbaijan back into an agrarian economy.

Azerbaijan used to rely primarily on its exports of pomegranates and hazelnuts to make money, but even high-worth crops like these are subject to droughts, floods, blights, and other events outside of the country’s control. USAID hopes to help Azerbaijan achieve a diverse and sustainable economy, with much less inequality than is present now.

If USAID succeeds, Azerbaijan may be able to mold its new-found wealth into a well-rounded and diverse economy.

Poverty in Lahore, Pakistan Malnutrition in Malaysia
Scroll to top