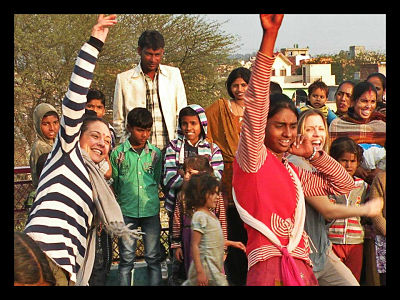 22 women from Mumbai’s red light district who had a vision of a world where no woman can be bought or sold joined together to form Apne Aap. In its founding stages, Apne Aap provided women a safe place to meet, mend clothing, sleep, and receive mail. Throughout the years, it has grown into an influential organization that now provides self-empowerment programs to women and girls trapped in prostitution in Bihar, Delhi, and West Bengal.

Sadly, all of the founding members have passed away from hunger, suicide, and AIDS related complications, serving as an important reminder of the need to empower women in India. Today, Apne Aap provides women and girls safe places to access education, improve their livelihood options and receive legal rights training. The organization reaches more than 15,000 women and girls and is continuing to fight to keep women and girls from being treated as commodities.

Apne Aap is working to increase choices for at-risk girls and women. The organization follows two Ghandhian principles perpetuating resisting violence to the self and others and upliftment of prostituted girls and women.

The leader of Apne Aap, Ruchira Gupta, has led a career focused on highlighting the link between human trafficking and prostitution laws. She also lobbies policy makers to shift the blame from the victims to the perpetrators. Gupta has achieved international acclaim for her humanitarian work and was awarded the 2009 Clinton Global Citizen Award and the Abolitionist Award at the U.K. House of Lords as well as an Emmy for her documentary titled “The Selling of Innocents,” which inspired the creation of Apne Aap. Gupta has widely challenged the belief that slavery and prostitution are inevitable.

Gupta works vigorously to change Indian trafficking laws. She wants to see the Indian anti-trafficking law known as ITPA be amended and to focus more heavily on the responsibility of the perpetrators and not the girls and women. She advocates for enhanced prosecution of traffickers, procurers, pimps, brother owners, managers, and other groups responsible for the proliferation of human and sex trafficking in India. Gupta’s work and the work of Apne Aap provide meaningful and invaluable services to women and girls trapped in the prostitution industry in India.