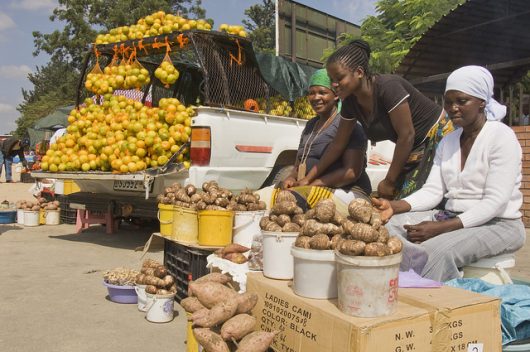 Whenever people debate how to end world hunger or global poverty, individuals often resign themselves to the fact that the problem is too big for a single person to actually affect much change. While global food insecurity is a daunting task, people still are fighting to address it. Below are three people (and one group) who started with only a plan and determination and are now making the world a better place.

In 2011, Elijah Amoo Addo, a Ghanian chef, saw a homeless man rummaging through his restaurant’s trash. When asked, the man told Elijah he was collecting leftovers for his friends. From that point forward, Elijah swore no food from the restaurant he worked at would go to waste.

Around 30 percent of children growing up in Ghana are malnourished, a statistic with a strong correlation to being impoverished, according to the Ghanian government. The high number of starving children in Ghana surprised Elijah and caused him to quit his job to start Ghana’s first food bank and the organization Food For All Africa.

Now, Food For All Africa recovers $5,700 in wasted food every month with the hopes of scaling up to other parts of Africa and feeding one million impoverished Africans by 2020.

Cindy Levin, a mother of two in her 40s, defeats the myth that there is not enough time in a day to help the less fortunate. In fact, the anti-poverty advocate dedicates her time to dispelling that very idea with her position at RESULTS. There, Cindy coaches people on how to organize fundraising activities themselves, with a focus on getting stay-at-home mothers and children involved and educating them on how to end world hunger.

But Cindy keeps going. In 2013, Cindy ran a 5K with her 9-year-old daughter; two days later, she ran a half marathon. In the process, she raised enough money to vaccinate 100 children against polio, measles, rotavirus and pneumococcal virus through [email protected], a cause she felt passionate about after traveling to Uganda and meeting with impoverished mothers.

In 1975, musician Harry Chapin and radio DJ Bill Ayres wondered why, in a world with so much, so many people were still lacking. These two friends believed that access to nutritious food was a human right and that the problem of how to end world hunger was solvable. As a result, they committed themselves to changing the policies and institutions that perpetuate world hunger.

In February 2016, 11 international students got together in Istanbul, where they envisioned creating a storytelling program to bring different cultures together and help displaced people from Syria and Iraq talk through some of their trauma.

When Ramadan came around that year, the group gathered donations to provide iftar (the traditional sunset meal) to people in Istanbul’s vulnerable Tarlabasi neighborhood. Now, 11 friends have become over 300 from 50 different countries. While cultural exchanges and soup kitchens are still an integral part of Istanbul&I, the group does so much more now. They provide digital literacy programs to refugees, give Turkish and English language lessons, landscaped a neighborhood retirement center, run comedy fundraisers and raise money to support an orphanage for boy refugees so they can continue their education.

You: How to End World Hunger

All these people began with a desire, a wish. They did not start out with money, but they believed in themselves and now others do too. So, next time someone says poverty is here to stay and nothing can be done about it, remember these four groups who asked, “how can I alleviate global poverty? How to end world hunger?” and took their brains and their hands and started working.