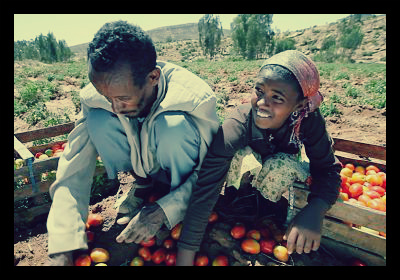 Africa continually fails to produce high agricultural returns, as low government investment translates to low productivity in the field. The agricultural sector employs 60% of its population. Yet it accounts for only 25% of the African GDP.

David Adama of Action Aid International faults politics. “African governments must follow through on their promises and provide more money for agriculture and ensure it is better targeted to help the millions of smallholder farmers,” he asserts.

Those in politics hold agriculture in low regard and as a result, youth do as well. The “unglamorous prospects” of working in the fields drive these young Africans to the cities. Youth constitute the largest and most productive labor force, yet fields across the continent fail to entice them.

The proportion of youth in the African workforce ranks the highest worldwide. Why? More people younger than 20 live in Africa than any continent in the world. An estimated 35% of youth working in Sub-Saharan Africa and 40% in North Africa. In contrast, youth comprise 20% of the European workforce. As the African population continues to grow, the World Bank estimates 60% of the global workforce will lie in Africa between 2010 and 2050.

To champion agriculture, greater investment and commercialization of the sector must occur. Gerda Verburg serves as chairperson of the Committee on World Food Security, and considers this key to attracting unemployed youth. To “reverse the rural mentality” of farming as a last resort, commercialization offers greater employment opportunities and a larger income.

“Private sector finance and agri-industries are helping to modernize agriculture by creating value adding chains that will pay a farmer more for his labor than the local market,” she notes.

The rise of supermarkets accompanies the rise of an African middle class. Large commercials threaten small farmers in regions, such as Lesotho. In this country, more than a million citizens farm. The development of large value chains and supermarkets excludes farmers, threatening their livelihood.

To participate in this lucrative business model, the government must invest in the small farmers. Youth seek food and economic security, yet cannot obtain this without protection against the encroachment of big businesses.

Electricity promises to increase agricultural yield and widening the access to it promises to retain youth in rural regions. As secretary of the Food and Agriculture Organization regional conference, Cheikh Ly cites electricity as a “major contributing factor” for migration. Many youth prefer urban centers because of access to telecommunications and Internet connectivity.

“Electrification is a key need for Africa’s rural economy. Modern agricultural production is not possible without reliable access to power. We will also lose the young who want to be connected and communicate via phones and the Internet if these needs are not met,” Ly remarks.

From Somalia to Ethiopia, food security poses a formidable threat to African youth. Yet these young men and women hold the potential to combat this. More than 50% of fertile and unused land lies in Africa. In addition to these natural resources, foreign investment will likely exceed $45 billion in 2020.

To reap the benefits of this investment, the government must fund an “agricultural renaissance” and help youth to feed future generations.