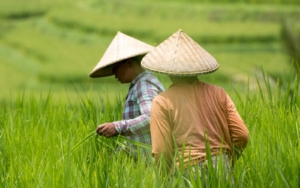 The link between agriculture and poverty reduction has significant documentation. Developing countries that have risen from high levels of extreme poverty have seen improvements in agriculture and an increase in farmers’ wages that cooccur with drops in the poverty rate. According to an OECD report, one can attribute 52 percent of poverty reduction to growth in agriculture incomes. In addition, for a measure of 1 percent GNI growth, agriculture contributed the most to poverty reduction. The policy that seemed to work the most was significantly increasing the protection of agriculture exports by reducing high taxes on exports and reducing overly inflated exchange rates. The greatest advantage of improving agriculture is that the poorest of society benefits the most. The lower the literacy rates, the stronger the poverty-reducing effect.

Changes in Vietnam over the decades exemplify the link between agriculture and poverty reduction. It lifted its people out of extreme poverty by focusing on improvements in its agriculture sector. The poverty rate was northward of 60 percent in 1990 and fell to just 20.7 percent in 2010. Vietnam lifted an estimated 30 million people out of poverty in total. During that time, the government incentivized farmers to invest in their land. Instead of food shortages, the country was able to export its commodities at a surplus. Multilateral trade agreements formed, and the country moved from a closed economy to one open to trade. In the 1980s, Vietnam had food shortages, and today it is a major exporter of rice to world markets.

Some developing countries did not focus on developing their agriculture sectors. In addition to this, those countries experienced the opposite trend. In contrast to Vietnam, Indonesia slowed in poverty reduction last decade. Overall growth in this sector has been weak with researchers making little progress. The poverty rate declined by only half a percentage point in each 2012 and 2013, which was the smallest declines in the last decade. One of the reasons might be a recent trend where small farmers experience eviction from their land in favor of large companies. These companies then use the land for palm oil and rubber. However, are signs that suggest that the agriculture sector may be rebounding. In 2017, there was an increase in both agriculture employment and production. Currently, 32 percent of Indonesians work in the sector. Additionally, rice production went up to 75.4 million tons and up from around 70 million tons in 2014.

Guinea is another country that focuses on other sectors for its economic growth. Mining makes up 80 percent of Guinea’s exports, and agriculture makes up the rest. Despite mining being a lucrative industry, it only employs 2.5 percent of the working population. Based on simulations using the 2014 population census, the poverty rate increased to 57.7 percent. Surprisingly, experts often cite Ebola as one of the causes, but low agriculture productivity is an equally large problem.

There is plenty of room for growth in this sector, both in terms of technology and land area farmed. In addition, farmers use very little agricultural inputs such as fertilizer and mechanization. In contrast, there are signs that agriculture is becoming more of a focus. The country has decided to invest in agriculture. In 2018, Guinea allocated 12.5 percent of its budget to agriculture, up from the current level of 7.3 percent. Additionally, IFAD and the Guinean government reached an aid agreement that will raise wages for 65,000 rural farm families and aims to increase family farm production.

For the poorest nations, choosing the sector to focus on reducing poverty is important. Evidence suggests that the link between agriculture and poverty reduction is strong. Developing countries that invest in the agriculture sector and promote policies that benefit farmers tend to fare better in this respect than countries that focus on other sectors.