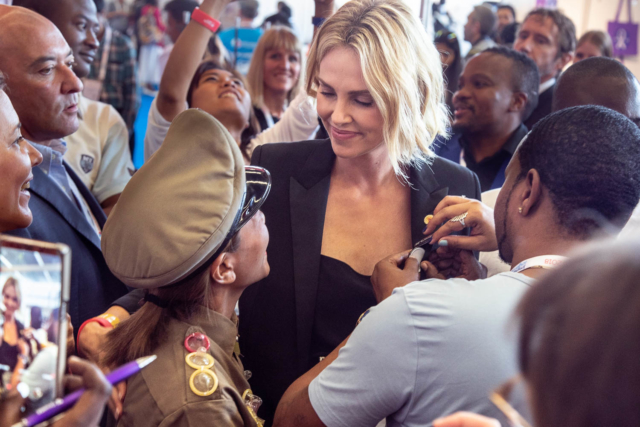 On June 26, 2021, actress Charlize Theron held a gathering at Universal Studios during the first showing of the “F9” movie. The event was to promote the Charlize Theron Africa Outreach Project. The occasion featured an outdoor party where celebrities auctioned donations for the foundation. There was also a question and answer session with the actors and producers of the new “Fast and Furious” movie, including Charlize Theron, Vin Diesel, Jordana Brewster, and the film director, Justin Lin. The gala was just one of the ways Theron utilizes her celebrity platform to aid South Africans suffering from HIV.

Theron created the Charlize Theron Africa Outreach Project in 2007. The project prevents the spread of HIV by aiding in the healthcare and education of young people. The project’s primary goal is to allow young Africans to have promising futures free from disease and give them an equal chance at life. To further this commitment, the initiative assists other African firms in helping address societal needs by providing university grants to young Africans.

Many solutions exist in the fight against the spread of HIV in South Africa, including education. South African women are less probable to get HIV if they complete university. In this way, providing young people with access to quality education intertwines with the fight against HIV. Accordingly, Theron’s gala directed the donations to helping South Africans receive the necessary education to remain healthy and live productive and fulfilling lives.

According to the Charlize Theron Africa Outreach Project, 67% of people infected with HIV reside in South Africa. The organization projects that 26 million people in the area currently live with HIV. In addition, almost 4,600 South Africans are diagnosed with HIV per week. Moreover, South Africa “represents less than 1% of the world’s population” but constitutes 20% of those infected with HIV worldwide.

The Charlize Theron Africa Outreach Project also states that education in South Africa is plagued with challenges such as school abandonment and limited accessibility to school supplies. As a result, citizens have a tough time finishing school. In fact, nearly 50% of South Africans who begin college leave prior to finishing their studies.

Furthermore, many young students experience the burdens of absent teachers, substance abuse, sexual abuse and early pregnancy on top of being impoverished. Consequently, less than half of students who start the first grade end up graduating from 12th grade. In addition, a lower percentage of these young students are eligible for college. As such, the youth cannot contribute to the region’s economic development, which keeps the region impoverished.

In August 2020, Theron held a fundraising party similar to this year’s June 2021 gala. The 2020 fundraiser featured a drive-in screening of “Mad Max: Fury Road.” Once again, the proceeds went toward the Charlize Theron Africa Outreach Project. Theron held the event in the parking lot of the Grove Mall in Los Angeles. However, the party only allowed 90 vehicles due to COVID-19 guidelines and cost $1,000 for two individuals. Attendants remained in their cars and listened in to “the night’s audio” by tuning into 89.1 FM.

Theron has used her celebrity platform to raise awareness about successful approaches to stop the spread of HIV and safeguard those already infected with it. The star’s strategy to encourage donations is very creative and garners much-needed support in the fight against HIV. Through more galas or other creative fundraising avenues, the Charlize Theron Africa Outreach Project will be able to sustain the valuable aid it provides to young Africans by improving access to education and decreasing the risk of HIV.