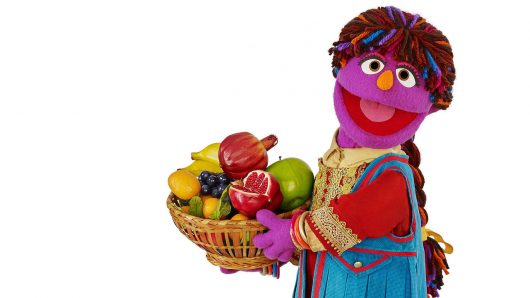 Afghanistan’s Sesame Street is debuting its first Afghan Muppet character, who just happens to be a girl.

According to PBS Newshour, although Afghanistan’s Sesame Street has been running for about five years, it has mostly included international versions dubbed into local languages, with only short sequences filmed locally.

The character is a six-year-old with multi-colored hair, wearing a headscarf with her school uniform, reported the New York Times. The debut of a female character is noteworthy for Afghanistan, where women’s rights are strictly curtailed.

Also notable is the extremely low rates of both education and literacy for girls in Afghanistan, with 85 percent of girls receiving now formal schooling, and a literacy rate of 24 percent, reported Newshour.

Under these circumstances, having a bright and curious female character like Zari debut to audiences in Afghanistan is a positive step. The Huffington Post reports that Afghanistan’s Sesame Street is the most watched show by young children in the country. Sesame Workshop, the non-profit that produces Sesame Street, recorded that 81 percent of children aged three to seven have seen it.

Sherrie Westin, Sesame Workshop’s executive vice president of global impact and philanthropy, spoke to Reuters about her excitement in introducing a female character. She thinks she may just have the power to change some minds, including fathers’ attitudes about educating daughters.

Westin told Reuters, “The exciting part about Zari is that she is modeling for young girls that it is wonderful to go to school and that it’s ok to dream about having a career.”

Specifically, Zari will appear in segments about health, exercise and well-being, reported the Huffington Post. One segment will feature Zari visiting her doctor for a check-up, and asking how she can become a doctor herself. Zari will interview various kinds of professionals for the show.

She will also speak directly to viewers and interact with kids in person on the show, said the New York Times.

According to Huffington Post, Sesame Workshop is working with the Afghan education ministry to try to reduce any resistance to the notion of an empowered female character on a popular children’s show.

Sesame Street changed attitudes in the U.S. when it debuted almost 40 years ago. As Westin told Reuters, “Part of the power of the broadcast and Zari’s potential as a role model is to reach children and parents where they may not have access to other educational content.”