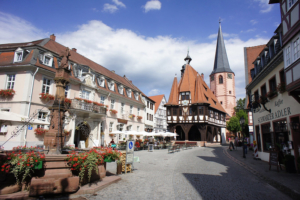 The fourth-largest economy in the world and the most influential nation in the European Union, Germany plays an integral role in global politics. A parliamentary democracy based in Berlin, the country has experienced several regime changes within the 20th century alone. Despite a history of conflict, Germany has made much progress leading to exceptional growth, however, poverty in Germany still remains a challenge.

The History of Germany

In the early 1900s, the country had been unified under the banner of the German Empire. A decade later, it was one of the world’s leading economic and industrial powers, rivaled only by the United States and the British Empire. After its defeat in World War I, Germany was forced to pay humiliating reparations that indirectly led to the formation of the far-right Nazi Party.

Under Adolf Hitler’s reign, the Nazis consolidated control over Germany, engaged in vast human rights atrocities, and waged a global war against the Allied nations. Berlin was defeated for a second time, leading to a partition between East and West Germany, where the Soviets controlled the East and NATO controlled the West for the duration of the Cold War.

During this period, West Germany rebounded economically, becoming a global powerhouse. The fall of the Berlin Wall in 1989 signaled the beginning of reunification and Germany’s newfound place in the modern world.

Despite an expansive social safety net, poverty continues to brew in Germany. In the mid-2010s, Angela Merkel, the country’s chancellor, agreed to admit into the country hundreds of thousands of refugees fleeing the Syrian civil war.  A few years later, COVID-19 hit, throwing the nation yet another curveball. Through it all, Berlin has shown a keen ability to survive and adapt while maintaining openness and transparency, even as poverty alleviation remains a challenging goal.

5 Facts About Poverty in Germany

The overall outlook for Germany is mixed. Its long-term prospects remain uncertain, with a steady yet slow growth rate and hard-set levels of income inequality. Under the surface, poverty continues to brew. But, all is not lost. The country benefits from an extremely high life expectancy and average per capita GDP. Furthermore, Germans are innovative people, building one of the world’s most successful societies in the post-World War II period. With more adaptability and innovation, the possibilities of poverty reduction are limitless.