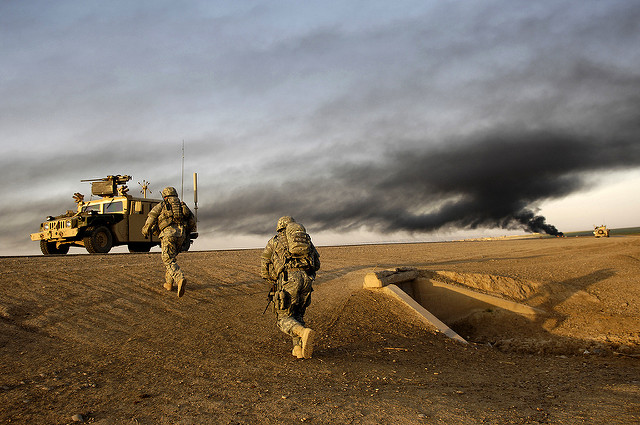 The Iraq War began in 2003 under the Bush administration. A common misconception among the Iraq War facts is that the war was a response to the 9/11 terrorist attacks; however, there was no evidence of Iraq’s connection with the attack. The United States intended to abolish Saddam Hussein’s regime and confiscate any weapons of mass destruction.

The war went on for eight years until President Obama officially announced that he would be withdrawing troops from Iraq in 2011. However, when ISIL began taking control of Iraqi land in 2014, U.S. military advisors returned to the country to combat the spread of the Islamic State. To understand the return and current presence of the United States in Iraq, it is important to know the following Iraq War facts.

When the U.S. began the war with Iraq in 2003, the purpose was to take down Saddam Hussein from the Iraqi government; however, the United States’ current presence in Iraq is largely due to the permanent threat of terrorism in the Middle East caused by terrorist groups such as ISIL.

The Islamic State of Iraq and the Levant is a terrorist organization that follows radical Sunni Islam. It first gained global attention in 2014 with its presence in Iraq and Syria but also spread around the world to countries like Afghanistan, Egypt, Bangladesh and Pakistan.

ISIL initiatives were largely funded by oil revenue made on the black market. The group took control of oil fields in both Syria and Iraq and would sell this oil to fund their activities. Since then, they have lost much of their control of these oil fields to the Iraqi army and their revenue has decreased.

Although troops were withdrawn from Iraq in 2014, there are still over 5,000 American soldiers in Iraq due to the ongoing “war on terror” in the Middle East. Interestingly, though, it was found that these numbers were not exactly accurate. Pentagon officials acknowledged only over half of the troops are actually present in Iraq — one of the most shocking Iraq war facts as a report found that the actual amount was 8,892.

This number is more than 75 percent more than originally stated. While these figures could seem high, they are relatively small when compared to the number of troops present under the Bush administration. A decade ago, the combined troop total approached 200,000.

Since their return in August 2014, the U.S.-led coalition has conducted more than 13,300 airstrikes against ISIL targets in the area. Through the years, these airstrikes have led to the Iraqi military regaining much of its land from ISIL. Iraq’s government announced the end of the war against the Islamic State in December 2017, over three years after they first began taking control of Iraqi land.

The Islamic State has now lost most of the territory they once took control of. In a statement, the military said it “fully liberated” all of Iraq’s territory and retook full control of the border. According to the U.S.-led coalition against the Islamic State, 98 percent of territory once claimed by the jihadist group has been reclaimed.

Since the victory over the Islamic State, the U.S. has announced that it will reduce the number of troops in Iraq. That being said, the United States will not fully leave Iraq despite the fact that ISIL no longer controls Iraqi land.

Defense Secretary Jim Mattis issued a statement saying, “Despite these successes, our fight is not over. Even without a physical caliphate, ISIS remains a threat to stability in the recently liberated areas, as well as in our homelands.” This belief is largely due to the terror that has been created through attacks around the world. Today, the goal is to fight the Islamic State from spreading its influence.