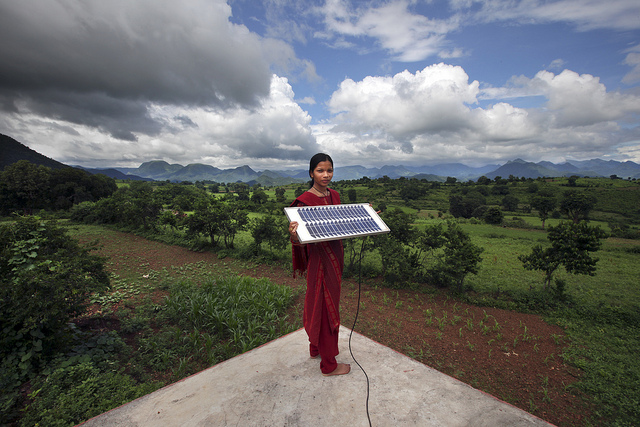 The words “energy crisis” are more common and less panic-inducing than ever before. In life, days for most people end the same way they begin ― by flipping the light-switch.

The National Solar Initiative was a global contribution in one of many efforts to combat the slippery slope of climate change. The 2008 initiative was created by the United States government with several targets in mind, one of which included solar power.

According to the National Action Plan on Climate Change, “India is a tropical region where sun is available for longer hours per day with great intensity,” so India had seen a reason to establish responsible and smart change. Also, another global agreement for change include the Paris Agreement signed in 2016, which sought to curb rising global temperatures by 1.5 degrees Celsius. Since these action plans, India has taken strong global action in becoming one of the leaders in alternative energy sources.

The village of Diu, an island in western India, is quaint compared to its neighboring counterparts. With a population of 50,000 people, Diu is now known as the Indian village powered by the sun and provides electricity for some of India’s poorest populations.

Mostly known for its holiday tourism, Diu became a territory in 1987, and is one of seven Union territories located in India. While 60 percent of Indian poverty is located on the eastern side of the country, alternative energy sources will continue to aid economic growth in Diu. Data for Gujarat, India (just above Diu) indicates that although the state is heavily manufacture-based, the nation never managed to reach economic growth.

Despite this status, strong new data suggests many positive implications regarding higher living standards. The first is increased local communication. Solar power in Diu has established communication and economic relations with its neighboring state, Gujarat, due to the fact that most night-time energy stems from this ally.

In 2017, Diu imported only 26 percent of its electricity from Gujarat; the other 73 percent came from their own solar power. Such communication and negotiation is useful for global trade advancements in the future.

Alternative energy has also provided education. Non-governmental organizations — such as The Barefoot College — train and educate solar engineers. The students go on to repair solar lighting and heat in an effort to increase electrification, which is especially helpful in rural areas similar to the Indian village powered by the sun.

Perhaps the most positive ramification to modernizing electricity is the exponential economic effect. According to The World Bank, global powerhouses would be able to focus more attention on alternative sources in places like Diu by ending fossil fuel subsidies. Furthermore, researchers would have more access to data regarding the benefits of solar energy alleviating poverty.

The answer to this question lies within the middle of India’s Eastern hills. The expansive panels cover almost 50 acres, and fuel all of the village’s daytime power needs. With a smaller population, 10.5 megawatts (MW) of energy are created but only 7 MW are used; thus, rapid population growth is a proven problem. Fortunately, though, generating greater resources allows the population to both increase and receive adequate power.

By 2019, the Indian village powered by the sun will welcome wind power to the island. The government will create 6.8 MW of wind power that will then be used for day and night energy.

Change On the Horizon

With other alternative energy sources on the horizon, it’s safe to say that Diu will no longer be the only Indian village powered by the sun. Diu, and many other countries in 2019 will take on the needed role of environmental leaders with exciting new sources of energy.