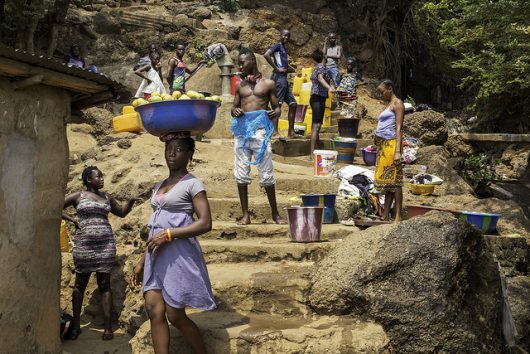 The history of Ebola in Sierra Leone can be traced back to December of 2014. The illness started out slow and unsuspecting as it crept across the land until really solidifying its grasp in May and June.  From then on, the cases of Ebola continued to increase at an exponential rate.

The First Case and Subsequent Infection

The first case was that of an eighteen-month-old boy from a small village in Guinea. He was thought to have been infected by bats in the region. Soon after, other reports of Ebola-like symptoms became rapidly apparent. In March alone, there had been a reported 49 cases and 29 deaths.

One of the next infected was a house guest to the family of the index patient. She traveled home to Sierra Leone from Guinea unknowingly carrying the Ebola virus with her. She died shortly after her return due to the disease; however, her death was not investigated or reported until two other members of her family died.

The epidemic really began to flourish after the death of an infected traditional healer. The healer would treat Ebola patients across the border in Guinea but was a resident of Sierra Leone.

She eventually succumbed to the disease and a funeral service was held on her behalf; this is where the spread in Sierra Leone really increased. Thirteen women, all of whom attended the funeral, contracted the disease and eventually died as well.

Investigation processions commenced proceeding the funeral induced infections and it was found that 365 Ebola-related deaths started from that very funeral. It was also recognized that there were two strands of the virus present amongst the infected from the funeral.

In knowing the two variations of Ebola, researchers were able to retrospectively look for and trace the disease in blood samples. This made the containment of Ebola in Sierra Leone and respective infected regions much easier.

By the summer of 2014, the major town of Kailahun and its neighboring city Kenema were declared to be in a state of emergency. The World Health Organization (WHO) and other affiliated aid agencies provided and concentrated their response teams in the area.

Unfortunately, the unsatisfactory public health infrastructure, the impoverished living conditions and the lack of preparedness aided the rapid spreading of the disease. By halfway through July, the aid teams from the World Health Organization buried over 50 bodies in the span of just 12 days in Kailahun alone.

Approximately two years after the first Ebola case was discovered, there were 28,600 cases and a resulting 11,325 deaths reported. The epidemic finally came to an exhausted end when Sierra Leone declared itself officially Ebola-free in March 2016.

Unfortunately, the history of Ebola in Sierra Leone has continued in 2018 as the virus reared its ugly head again in May. The vigilance in regards to Ebola in Sierra Leone improved tremendously over the years since the first epidemic but it is still quite difficult to contain and extinguish.

Countless families and civilians still face the mental effects of the calamity from both the initial epidemic and the most recent devastation.