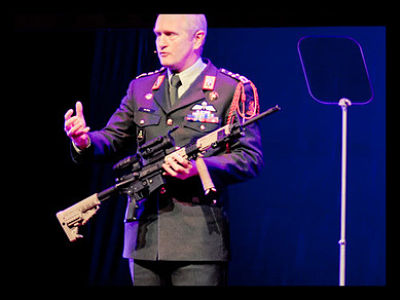 Why I Chose the Gun, Peter van Uhm

The idea of guns being used as a tool for peace is counter-intuitive. In his talk, Uhm explains how weapons can be used not as a source of violence, but as a protective measure against injustice. It is a talk that is full of controversial ideas, and worth listening to and thinking about. In a world where it is overly idealistic to imagine that it is possible to develop a blanket ability to avoid all conflict, Uhm’s outlook is one that does not immediately sit well with our gut, but it all the more important to listen to because of it.

“The training of troops has to change. And I think there are signs that it is beginning to change. The British military have always been much better at this. But there is one magnificent example for them to take their cue from, and that’s a brilliant U.S. lieutenant colonel called Chris Hughes. And he was leading his men down the streets of Najaf — in Iraq actually — and suddenly people were pouring out of the houses on either side of the road,screaming, yelling, furiously angry, and surrounded these very young troops who were completely terrified, didn’t know what was going on, couldn’t speak Arabic. And Chris Hughes strode into the middle of the throng with his weapon above his head, pointing at the ground, and he said, “Kneel.” And these huge soldiers with their backpacks and their body armor, wobbled to the ground. And complete silence fell. And after about two minutes,everybody moved aside and went home.” – Scilla Elworthy

Elworthy’s talk stands in stark contrast to Uhm’s. Speaking through her personal experience, and the histories of famous non-violent leaders like Mandela and Suu Kyi, Elworthy explores the alternative to military power. Elworthy has no illusions about the difficulty of non-violent reactions; it goes against our instincts and she speaks about the necessity of developing our ability to understand before we react. A relatively short but powerful talk, Elworthy manages to show us how hard and how important it is to rethink how we fight our battles.

“I believe we’re living at a time in human historywhere it’s just simply unacceptable that children wake up and don’t know where to find a cup of food. Not only that, transforming hunger is an opportunity, but I think we have to change our mindsets. I am so honored to be here with some of the world’s top innovators and thinkers. And I would like you to join with all of humanity to draw a line in the sand and say, “No more. No more are we going to accept this.” And we want to tell our grandchildrenthat there was a terrible time in history where up to a third of the children had brains and bodies that were stunted, but that exists no more.” – Josette Sheeran

Often, people think of the world’s greatest crises as enormous, separate challenges. World peace as separate from world hunger, poverty and women’s rights and education all distinct entities with unique challenges. The truth is they are all connected, feeding into each other. The presence of one almost inevitably creates breeding grounds for the others. Sheeran, head of the UN World Food Programme, walks us through the practicalities of ending hunger, and the potential ramifications of doing so. Though it sounds like a huge project, Sheeran uses real-life examples to show how innovative thinking and concerted effort can lead to real, large-scale change. Sheeran’s passion and pragmatism make ending hunger seem infinitely achievable.

Why To Believe in Others, Viktor Frankl

“If you don’t recognise a young man’s will to meaning, man’s search for meaning you make him worse. You make him dull, you make him frustrated, you still add and contribute to his frustration. While, if you presuppose in this man, in this so called criminal or juvenile delinquent or drug abuser, or so forth, there must be a – what do you call it – a spark, a spark of search for meaning. Let’s recognize this…let’s presuppose it and then you will elicit it from him and you will make him become what he in principle is capable of becoming.” – Viktor Frankl

Better spoken than summarized, holocaust survivor and psychologist Viktor Frankl explains, in four humorous and poignant minutes, why to believe in others.