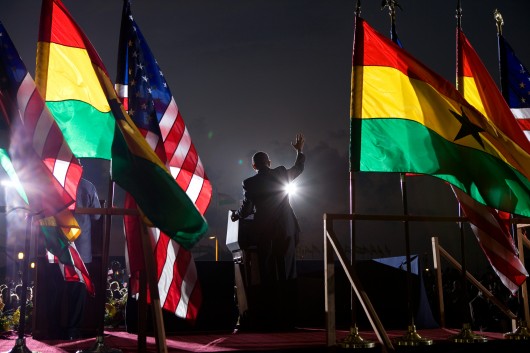 In the first 22 presidential primary debates, the 2016 presidential candidates have answered 1,087 questions posed by moderators. However, only 315 of these questions related to foreign policy and national security, with not a single one addressing America’s strategy for global development and international aid.

These numbers come from an analysis conducted by ONE, a global policy and advocacy organization co-founded by Bono. Researchers at ONE reviewed the transcripts of five Democratic debates, nine Republican “main” debates and seven Republican “undercard” debates, counting the number of foreign policy and national security questions posed.

ONE also analyzed each candidate’s answers to these questions, summing up the number of words they used. In total, candidates discussed foreign policy and national security using about 88,000 words. Out of these, only 0.26 percent, or to 232 words, were related to America’s global development strategy.

The topic came up during the Democratic candidates’ debate in Des Moines, Iowa on Nov. 14, 2015. Both Martin O’Malley and Hillary Clinton briefly mentioned investments in sustainable development meant to tackle the root causes of instability. Clinton also lauded the efforts of aid workers operating abroad.

Despite the lack of current discussion among the 2016 presidential candidates about global development, in 2011 Hillary Clinton gave a speech in Washington, DC at the U.S. Global Leadership (USGLC) Conference, stating: “The growth of the developing world presents a major economic opportunity for American business today and a thousand opportunities tomorrow.”

She pointed to South Korea as an example of how global development can benefit the American economy. “We provided $6 billion in aid and loans to South Korea from the end of World War II through the Korean War to the mid-1970s. That would be roughly $35 billion in today’s dollars. Today, we export more than $40 billion to Korea each year, and we are poised to export even more under the new free trade agreement.”

Former National Security Advisor to President Obama, General James L. Jones, USMC (Ret.), has spoken of the security benefits of investing in international development. In a statement regarding the U.N.’s Global Goals for Sustainable Development, General Jones said: “Support for development is a vital component of America’s national security strategy, and has been since the end of World War II. In today’s complex environment, development, plus security and good governance equals stability.”

Former Secretary of State Colin Powell made similar remarks to General Jones back in 2002. According to an article published by the Council on Foreign Relations, Powell told the World Economic Forum in New York: “Terrorism really flourishes in areas of poverty, despair and hopelessness, where people see no future. We have to show people who might move in the direction of terrorism that there is a better way.” The Bush administration integrated international development as a key element of their anti-terrorism strategy.

In an op-ed published in USA Today, the North American Executive Director for ONE, Tom Hart, argued that the 2016 presidential candidates must adjust their proposed foreign policy plans to include a strategy for global development.

Hart concludes his op-ed with a strong statement, asserting that “No one should get to be president of the United States without publicly demonstrating an understanding and appreciation for the essential role that fighting poverty and stopping disease plays in securing America.”

The Best Time To Ask For A Donation How Many Senators Are There?
Scroll to top