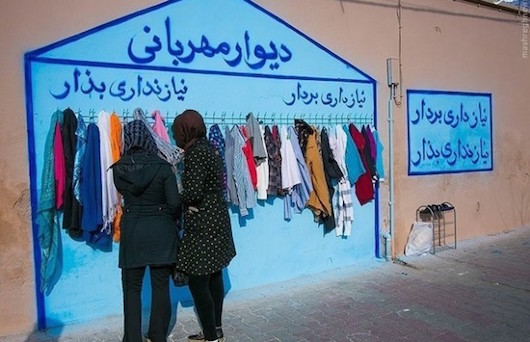 It is difficult to know how many people in Iran are living in poverty. As of January 2016, the World Bank has not listed this information. The CIA World Factbook last estimated in 2007 that 18.7 percent of Iran’s population lived below the poverty line; however, that information is nine years old. Thanks to social media we know two grassroots campaigns, Payane Kartonkhabi and “walls of kindness,” are trying to make life easier for impoverished Iranians.

Ali Heidari, an advertising manager in Tehran, told The Guardian about the tragedy he saw when he delivered meals to the homeless living in Harandi, a neighborhood in south Tehran, with his wife and son in May 2015.

Heidari simply asked friends and neighbors to donate meals for him to deliver, which grew into the formation of Payane Kartonkhabi, which means ending homelessness. The group still delivers meals, but as of October 2015, they began installing refrigerators to make nutritious food more easily accessible.

“The most necessary thing is nutrition,” Heidari said to The Guardian. “If a homeless person is well fed, he or she won’t so easily collapse and die.”

Payane Kartonkhabi took to social media using Facebook, Instagram and Telegram to spread awareness. The group is committed to ending homelessness, providing training workshops to help people find jobs and continuing their efforts to send recovering addicts to private treatment centers and covers the cost according to the Guardian.

“We are not doing anything special. We are just paying our debt to society,” Heidari told The Guardian. “If we have homeless people in Iran, it’s because at one point we were not caring enough toward our people. So now we are trying to compensate.”

The first “wall of kindness” appeared in the north-eastern city of Mashhad with the saying, “If you don’t need it, leave it. If you need it, take it,” according to BBC News.

The man who created the “wall of kindness” in Mashhad wants to remain anonymous according to Hamshahri, a local Iranian newspaper. He told Hamshahri he was inspired by similar acts of kindness throughout the world and in Iran, like Payane Kartonkhabi’s refrigerator installations.

The creator of Mashhad’s wall of kindness has asked people on social media to continue giving, according to Hamshahri. “I’ve told them to bring clothes in small quantities so that those who come here know that clothes are always available,” the man told Hamshahri.

At least three more “walls of kindness” have sprung up across Iran since December according to Radio Free Europe.

Grassroots campaigns like these, with social media bringing people together, are helping to meet the immediate needs of the impoverished and homeless around the world.