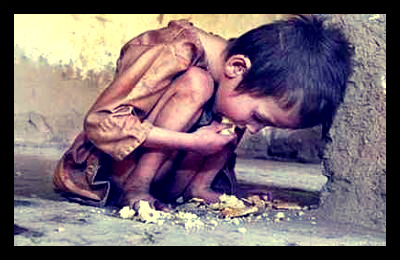 Scholars have discovered that the issue with world hunger is not a food shortage, but the logistics behind food distribution. We need to improve access to food by looking at production strategies, trade agreements and food aid. Here are 10 quotes on world hunger.

“Close to a billion people – one-eighth of the world’s population – still live in hunger. Each year 2 million children die through malnutrition. This is happening at a time when doctors in Britain are warning of the spread of obesity. We are eating too much while others starve.” – Jonathan Sacks, jewish scholar.

“We are a country that prides itself on power and wealth, yet there are millions of children who go hungry every day. It is our responsibility, not only as a nation, but also as individuals, to get involved. So, next time you pass someone on the street who is in need, remember how lucky you are, and don’t turn away.” – Lesley Boone, actress and social activist.

“When you share your last crust of bread with a beggar, you mustn’t behave as if you were throwing a bone to a dog. You must give humbly, and thank him for allowing you to have a part in his hunger.” – Giovanni Guareschi, Italian journalist.

“When people were hungry, Jesus didn’t say, “Now is that political, or social?” He said, “I feed you.” Because the good news to a hungry person is bread.” – Bishop Desmond Tutu, Anglican bishop and social activist.

“It is important for people to realize that we can make progress against world hunger, that world hunger is not hopeless. The worst enemy is apathy.” – Reverend David Beckmann, president of Alliance to End Hunger.

“There are genuinely sufficient resources in the world to ensure that no one, nowhere, at no time, should go hungry.” – Ed Asner, actor and social activist.

“The fact is that there is enough food in the world for everyone. But tragically, much of the world’s food and land resources are tied up in producing beef and other livestock–food for the well off–while millions of children and adults suffer from malnutrition and starvation.” – Dr.Walden Bello, 2003 Right Livelihood Award winner.

“The war against hunger is truly mankind’s war of liberation.” – John F. Kennedy, 35th President of the United States.

“The first essential component of social justice is adequate food for all mankind. Food is the moral right of all who are born into this world.” – Norman Borlaug, biologist and humanitarian.