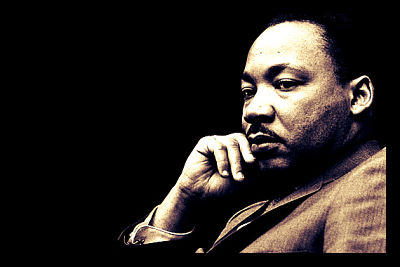 1. At 35 years old, Martin Luther King, Jr. was the youngest man to have ever received the Nobel peace prize. Currently Tawakkol Karman of Yemen is the youngest winner, at 32.

2. Dr. King worked for Economic Equality, not just civil rights. After the passage of the 1964 Civil Rights Act and the 1965 Voting Rights Act, Dr. King began the Chicago campaign. It targeted the economic reality of segregation and focused attention on the plight of the urban poor in the north.

3. Martin Luther King, Jr. improvised entire parts of the “I Have a Dream” speech, including the famous “dream” passage. It was edited right up to the moment Dr. King began speaking.

5. In 1963, Dr. King was named Time Magazine’s Man of the Year. King garnered a lot of attention that year for leading the March on Washington and delivering his famous “I Have a Dream” speech.

6. While at Crozer Theological Seminary in Pennsylvania, Dr. King was elected president of his senior class, which was predominately white.

7. His Seminary Professor gave him a C+ in a Public speaking course! King was renowned for his great public oration, but even he didn’t master the skill over night.

8. Many Civil Rights Activists did not support the 1963 “March on Washington for Jobs and Freedom.” Some leaders, such as Malcolm X and Storm Thurmond, held different views on the civil rights movements and, at times, disagreed with Dr. King’s approach.

9. Martin Luther King made an impact even while in jail. After being detained for defying an injunction against protests in Birmingham, Dr. King wrote his “Letter from Birmingham Jail.” It detailed reasons for acting to change civil rights in Birmingham and around the country and became a monument of the Civil Rights Movement.

10. Mahatma Gandhi and the principle of non-violent action heavily influenced Dr. King. King was introduced to the ideology while at a lecture given in Philadelphia by the president of Howard University.

Martin Luther King, Jr. firmly believed that everyone, regardless of their background, should receive equal treatment under the law and have an opportunity to live, as well as receive education and work without being discriminated against.  This is a message we must remain committed to in our fight against the global inequality that characterizes poverty in the world today.

Lifting the Ban on Gaming Consoles in ChinaProgress in Nuclear Talks: Iran and Global Power
Scroll to top