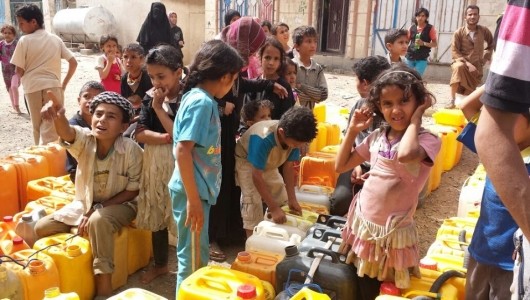 Yemen has been through a whole lot in the past few years. While political unrest has plagued the nation for years, in the recent months, the country has been dealing with ongoing airstrikes.

“Some days it’s calm, and some days it’s not. It’s so unpredictable. Right now, we’re on day four with no electricity. When it does come on, it will only be one for an hour,” Hana reports. At 26-year-old, Hana is a youth assistant project manager for the Foundation for Peace project.

The project was founded in 2012 by the Cooperative for Assistance and Relief Everywhere (CARE), with the goal of teaching members of the community to effectively prevent and resolve conflicts. They focus on women and youth that typically do not have the opportunity to be influential or participate in dialogue.

Many people in the country do not have nearby access to water sources and have to walk for miles every day. The limited amount of water sometimes results in clashes within communities.

In the past, wealthy business owners and merchants have paid for trucks to bring water to the poor. However, the trucks wasted a lot of water since they did not offer an effective method of collection. To rectify this inefficiency, the water tanks that CARE installed are permanent. They allow for people to obtain water with ease and less conflict.

Airstrikes and a naval blockade, however, have been preventing essential supplies, such as fuel and food, from reaching Yemen. Because of the lack of fuel, prices have soared and the cost to ride the bus has doubled. Service has also become undependable and people have switched to riding bikes for transportation.

The closure of many Yemeni schools poses another issue. Yemen has a very large population of young people and the majority of them are unemployed and out of school. This leaves them susceptible to recruitment into dangerous militant groups.

Yet, Yemen’s youth are finding ways to stay out of trouble and bring about dramatic change. For example, they initiate groups that spread awareness about issues like women’s rights. Women are fighting for the right to ride bicycles, which is traditionally not allowed in Yemen.

They turn destroyed buildings and windows into art and paint messages of peace all over their cities. Young people are passionate about promoting peace and developing their nation.

The United Nations Development Program gives out a yearly National Award for the Best Innovative Small Business Plan to Yemeni youth. Young people are able to submit smart business ideas for a chance to make their ideas into an entrepreneurship opportunity.

The goal of the award is to kick start the motivation and genius of Yemen’s youth, as well as generate new opportunities for employment. With the award, young people start their own businesses to contribute to their community and the nation’s developing economy.

The youth’s ability to take their lives and future into their own hands also grants them a hearty amount of satisfaction and self-esteem. There are five winners chosen who each are given $20,000 and support from the UNDP while executing their idea.

At the moment, Yemen receives funding from organizations like CARE. But even without aid in the future, the youth hope to keep inspiring progress and peace.